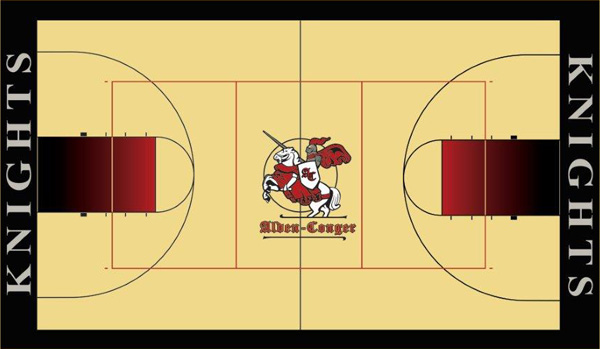 The design for Alden-Conger School’s gym floor by FLR Sanders, of Princeton. The floor, which suffered moisture problems, received its first complete repair and repainting for the first time since its construction in 1957. -- FLR Sanders

ALDEN — For more than 50 years, problems have bubbled up below the gym floor in this small town’s school.

This summer it finally received a makeover.

Beginning on July 11, the floor in Alden-Conger School was sanded, sealed and finished in time for volleyball practice to begin on Aug. 15. The floor also received a new redesign with paint for the first time since its construction in 1957 and repairs to remove moisture from under the boards.

The finished product was a shiny, new floor the Knights can finally be proud of.

“It looks sharp,” Alden-Conger athletic director Paul Ragatz said. “We’ve never had logos or paint other than just skinny lines. I put together the proposal and have asked for years for this.”

The court’s design features a red and gray Knights logo in the center with thick, black out-of-bounds lines. The most striking feature is its free throw lane which fades from red to black.

While the original wood wasn’t replaced, for the first time since its construction the court received a complete repair. Moisture problems have plagued the court for years and created dead spots in the wood. To fix the problem, the court was pinned to remove the water.

The floor was repaired and painted by FLR Sanders, of Princeton, and cost $24,478. Ragatz said estimates to completely replace the floor came in upwards of $100,000. Money for the repairs came from the school’s general fund.

In addition to the floor being remodeled, the gym’s stage was also renovated.

As opposed to the floor, all the wood on the stage was replaced by Dave’s Floor Refinishing, of Alden.

“Once you fix one thing you realize there’s a lot of other things that don’t look as good,” Ragatz said.