The funeral service for Marceline M. Fure, of Albert Lea, will be held at 10:30 a.m. Saturday at Salem Lutheran Church. The Rev. Mark Niethammer will officiate. Interment will be in Trinity Lutheran Cemetery, rural Kiester. Visitation will be from 4 to 7 p.m. Friday at Bonnerup Funeral Service, and one hour before the service at the church. 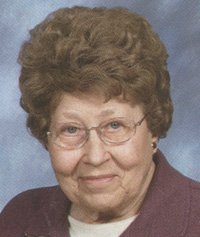 Born on Sept. 23, 1925, in rural Wells, the daughter of Otto and Ida (Boeck) Wille, Marceline graduated from Wells High School, lived with her cousin in Portland, Ore., for a year, and then worked in Minneapolis for a short time.

On April 12, 1950, she married Jenning Fure in Wells. They farmed and made their home in rural Kiester for many years. While in Kiester, she had been an active member of Trinity Lutheran Church. Since moving to Albert Lea 28 years ago, she was a faithful member of Salem Lutheran Church, where she enjoyed the “Sew and Tell” quilting group and participating in Bible study.

Marceline enjoyed tending her garden which included beautiful flowers and a plentiful harvest of vegetables. Her dill pickles were undoubtedly “the best.”

She had many interests which included all kinds of music, dancing, playing cards, traveling and watching baseball, especially the Minnesota Twins.

She was preceded in death by her parents; her husband, Jenning; sister and brother-in-law, Adeline and Mike Ewert; a son in infancy; and son-in-law, Keith Brue.