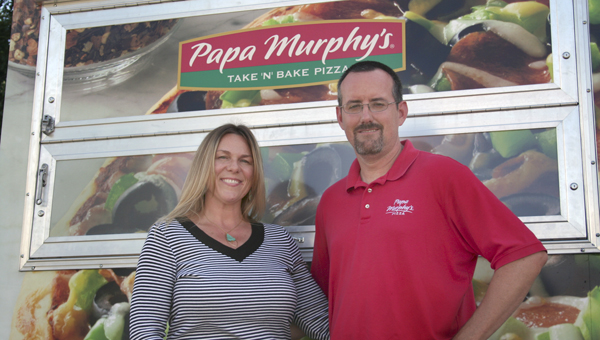 Mike Cooper and his wife, Amy, own nine Papa Murphy’s locations including local chains in Albert Lea, Austin and Owatonna. They have created a trailer that they hope will be utilized for fundraisers. -- Garrett Wampler/Albert Lea Tribune

Papa Murphy’s has been known for years for the pizza it makes and its customers bake, which it labels “Take ‘N’ Bake Pizza.”

However, at the Freeborn County Fair this week, customers will be able to try a product fresh out of the oven when they serve a take-and-eat version of the famous pizza.

Mike Cooper and his wife, Amy, own nine Papa Murphy’s locations including local chains in Albert Lea, Austin and Owatonna. They have created a traveling trailer to take to special events and sell ready to eat pizza. 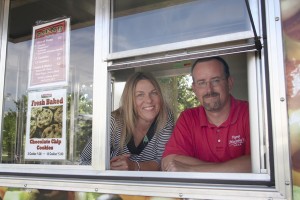 Mike and Amy Cooper will have their new Papa Murphy’s trailer at the Freeborn County Fairgrounds this week for the fair. -- Garrett Wampler/Albert Lea Tribune

“We have a lot of loyal customers at our stores,” Mike Cooper said. “This gives them the opportunity to have us in an atmosphere where they normally wouldn’t.”

They can do fundraisers by selling pizza by the slice and also allow groups to pre-sell their products and then deliver them to the group for distribution. Any group interested in fundraising with Papa Murphy’s can pick up a flier at any event in the trailer or at any in-store location.

“We’re real focused on giving back to the communities,” Cooper said. “ Doing business in a small community isn’t about take, take, take. You also have to give back,”

The Freeborn County Fair will be the seventh event for the trailer; it was first used at Austin’s Freedom Fest over the Fourth of July weekend. Cooper said it is also an opportunity for people in the community to come out and get a slice of pizza if they have never tried a Papa Murphy’s product.

At the fair, which opens Tuesday and runs through Sunday, Papa Murphy’s will have a diverse menu with four different types of pizza, a dessert and beverages. The top of the menu will be individual slices of cheese, pepperoni and sausage. They will also have an adult favorite: chicken garlic, which the Coopers say is the second-best seller behind pepperoni.

On the dessert menu, the Papa Murphy’s trailer will have fresh-baked chocolate chip cookies for the kids. They will also sell a variety of soda and water.

“I think it will bring more variety to the fair,” Cooper said. “We’ll be able to get our brand out there, too.”

Cooper knows of two other trailers like his in the Papa Murphy’s fleet. One is located in Seattle and the other is out of St. Cloud.

To his knowledge, this is the first time one of these trailers will be venturing to a fair of any kind.

“Papa Murphy’s corporate is using us as a test to see how it goes because it is in a whole new market,” Cooper said.

He also said from what he has heard from his customers, the reception has been good.

Cooper said the loyal customers are happy for a new take on the products and the new customers trying the product for the first time think it tastes great.

The trailer will run with a staff of three to five people serving over 100 slices of pizza every hour. Inside the trailer has two convection ovens, a pizza making line, pizza warmers and a walk in cooler.

Cooper said customers can also purchase whole pies at the stand and they will sell ready-to-bake pizzas if customers want one on the way home.

The pizzas will be made both on site and delivered from the local store to keep up with the anticipated consumption.

Cooper said this venture has been almost like opening up a new store because of the challenges they face with a trailer.