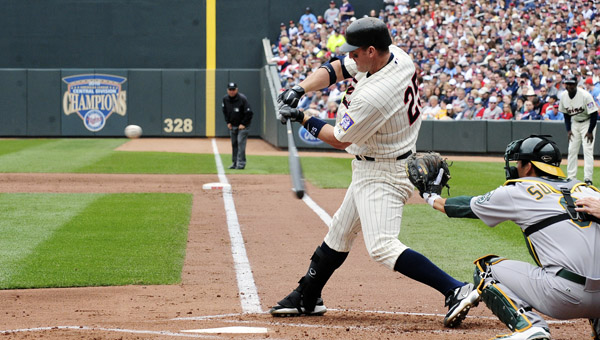 Minnesota Twins’ Jim Thome swings at a pitch in the home opener against the Oakland Athletics at Target Field earlier this season. Thome has 598 career home runs and didn’t get a chance for another Sunday as the game was postponed. -- Buck Monson/BuckMonsonPhoto.com

CLEVELAND — Jim Thome was hoping for a magical weekend — hitting his 600th career home run in the city where it all began.

Instead, Minnesota’s slugging designated hitter will have to wait to become the eighth Major Leaguer to reach the 600 mark. Thome, who hit his first 334 homers while playing for the Indians between 1991 and 2002, has been sitting at 598 home runs since Aug. 4.

“It would have been very special to do it here,” he said after Sunday’s game was postponed by rain. “I have a lot of great memories in Cleveland. We had some great teams and moments I’ll never forget.”

Thome was 0 for 2 with a walk in Friday night’s 3-2 loss. He was hitless in three at-bats and drew another walk in Saturday’s 3-1 defeat. Thome was in the lineup Sunday against left-hander David Huff and struck out in the second inning. The game was delayed by rain in the top of the third and finally called after a wait of 2 hours and 55 minutes.

Thome, who has nine homers this season, will take his quest for history to Detroit, where the Twins open a three-game series Monday night. Minnesota returns to Target Field to start an 11-game homestand on Thursday.

While Thome would like to make history as soon as possible, he knows patience is important when chasing a milestone.

“It’s just not something you can do,” he said. “That’s what makes it so special. I’m feeling good at the plate. I’m swinging the bat well.”

Thome had a large contingent of fans for the weekend series in Cleveland, including his wife and two children, his father, sister and brother-in-law.

“They’re going to follow me until I hit it,” Thome said. “I know my dad (Chuck) will. He won’t miss it. He’s retired so he can enjoy it.”

“He’s as good as they get,” Gardenhire said. “Everybody roots for him. It’s entertaining watching him. Those are the kind of players people pay money to watch. He’s put himself in that elite category.”

Gardenhire came to town hoping the Twins could gain some ground in the AL Central standings. Instead, he watched his team drop two frustrating games. The only highlight was Sunday’s rainout in which the Twins trailed 1-0 after two innings.

“In a strange way it helped us because some guys got a day off,” Gardenhire said of catcher Joe Mauer, right fielder Michael Cuddyer and center fielder Denard Span, who have been dealing with assorted injuries.