GLENVILLE — Back in June with a state government shutdown looming, Lonny Hagen, of Albert Lea, had an idea.

Being a sports fan, Hagen planned a softball league in which food items and money would be donated from each team. The three 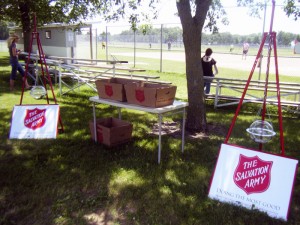 Boxes of food and Salvation Army kettles sit near the Glenville-Emmons High School’s softball field in June during a “Softball for the Salvation Army” league game. -- Andrew Dyrdal

large companies were all onboard and “Softball for the Salvation Army” was born.

Employees and their families from the three companies competed in Glenville during one Sunday a month in June, July and August. The teams were co-ed and required to have four women on the field at all times. Hagen said no umpires were needed.

“This was for the Salvation Army, and we kept the seriousness out of the game,” Hagen said.

Before each game, players donated non-perishable food items or money, and for each home run hit the batter donated one dollar to the Salvation Army kettle.

In July, Minnesota Corrugated Box joined the league but games were limited to five innings because the heat index was above 100 degrees.

“However, more food and money was collected,” Hagen said.

On Aug. 21, according to Hagen, the weather was beautiful and more spectators filled the stands to cheer on the companies.

“More food, more donations,” Hagen said. “And the home runs were many.”

On the final Sunday, players were missing from MCB’s and Select Food’s teams so they formed one squad to play Mrs. Gerry’s. Mrs. Gerry’s won the first game 17-8 and lost the second 28-9. Hagen said whether the scores were right or not, both teams had fun.

Mrs. Gerry’s won the “Softball for the Salvation Army” title and a traveling trophy.

“I am proud to be a member of the companies and this community who came out and helped in this worthy cause,” Hagen said.

Hagen thanked Glenville-Emmons School for providing the field and challenged other companies to get involved with the fundraiser next summer.