“Everything is nearly copacetic. I just bought Pop a rectal thermometer for his birthday. I wanted it to be a surprise. It said on the package that every thermometer had been tested. I’ve had some bad jobs, but being a rectal thermometer tester would be the worst. Pop is all shook up because his cousin the whaler died. One of his decoys fell on him. I’m looking at a new vehicle. I swerved to miss a deer with my truck and hit a deer crossing sign. I’ve been test-driving them. Nice rides. They even have warning lights that indicate when they’re low on fuel.”

“Kind of. When it runs out of fuel, it stops. One salesman told me I could buy a truck and make no payments for 90 days. I wonder who told him I was that way. If I could get a million people to give me a dollar each, I could buy a new truck. I just read a magazine article that said that Minnesota has the country’s worst drivers.”

“What did it base that statement on?” I ask.

“I’m not sure. I don’t know why I read magazines like that while I’m driving.”

Blessings from a butterfly

Darrell Soper of Albert Lea had a blue butterfly land on his arm. If a butterfly lands on your arm, don’t let your enchantment diminish because the butterfly was attracted to the salts in perspiration. Nathaniel Hawthorne wrote, “Happiness is a butterfly, which, when pursued, is always just beyond your grasp, but which, if you will sit down quietly, may alight upon you.” A Native American legend says that if you whisper your secret wish to a butterfly, it will be flown to the heavens and your wish granted. Blackfoot Indians believed that butterflies brought dreams. Some folks maintain that a butterfly landing on someone brings good luck. I hope that proves true. 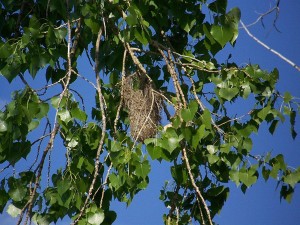 Photo of an oriole’s nest by Al Batt.

It was close, more humid than a walleye’s pocket. A brief sprinkle of rain had ended. I wondered gladly, looking at a buteo soaring overhead. In the musical, “Oklahoma,” the song said, “Watch a hawk making lazy circles in the sky.” That described the raptor I was watching — the red-tailed hawk.

A spider web waved from a branch. It looked like a small flag. An orange flame shot by. A Baltimore oriole landed on the branch holding the web. The branch barely trembled. The oriole wiped its bill on the branch as if it were sharpening a knife. A rainbow appeared in the sky. It passed in flying colors as the sun claimed the day. I stood in the shade provided by a tree that someone was thoughtful enough to plant years ago. I am thankful for the glimpses of nature that I am allowed. I realized once again that each day is an amazing journey. A day is ephemeral — a once in a lifetime opportunity.

A man from Illinois called last winter. He told me that cacophonous crows woke him each morning. He added that he had always wondered why a group of crows was called a “murder.” He said that he had found out why. Each morning, as he struggled to regain sleep, he wanted to murder crows.

From the Freeborn Frisbee

Students in Freeborn County, with the help of their teachers, gathered 5,000 bags of milkweed floss in the fall of 1944. The dried floss was used in making life preserver jackets for the armed forces. All bags with dried pods should weigh approximately five pounds. It is on this basis that the government was paying 20 cents a bag.

“Do purple martins eat many mosquitoes?” Purple martins are obligate aerial insectivores. They eat flying insects. Martins are generalists, eating bees, beetles, butterflies, cicadas, damselflies, dragonflies, flies, flying ants, grasshoppers, mayflies, midges, moths, stinkbugs and wasps. My experience has shown that dragonflies are a favorite prey. Martins do not eat large quantities of mosquitoes. Research showed that mosquitoes were less than 2 percent of a martin’s diet. There are reasons. Mosquitoes are most active at night. Martins are diurnal. Mosquitoes prefer staying close to the ground. Martins feed high in the air, as high as 400 feet. A dragonfly feeds an appetite much quicker than a mosquito.

“How can I measure the height of a tree?” Measure the distance from your eye to the joint of your thumb and index finger with your arm outstretched. Secure a stick the same length as what you measured from your eye to your hand. Hold the stick straight up and down at arm’s length in front of you. Step backwards until the tree’s base appears to rest on the top of your fist, while the top of the stick appears to touch the top of the tree. At this point, the height of the tree is equal to the distance from the base of the tree to you.

“I saw the biggest wasp I’ve ever seen in my yard. What could it be?” It sounds like a cicada killer wasp. It is up to 2 inches long with a black body with yellow stripes. Cicada killers nest singly in the ground. The males have no stingers. Females are capable of stinging but are difficult to provoke. After digging a deep nesting burrow in the ground, the female stings and paralyzes a cicada and places it in the burrow. She lays an egg in the body of the still living cicada. The egg hatches into a larva that eats the cicada, spends the winter in the tunnel and becomes an adult the next summer.

“Each day comes bearing its own gifts. Untie the ribbons.” — Ruth Ann Schabacker

“If I had influence with the good fairy who is supposed to preside over the christening of all children, I should ask that her gift to each child in the world be a sense of wonder so indestructible that it would last throughout life.” — Rachel Carson