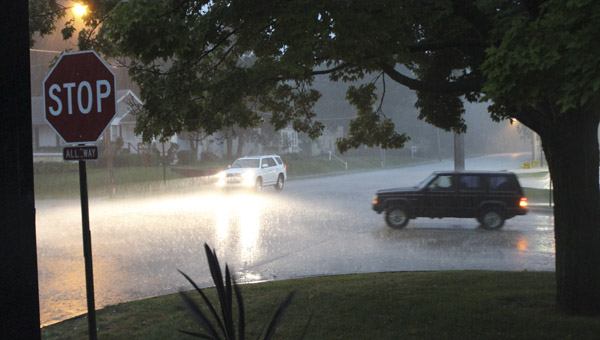 Rain pounds the pavement at the corner of Front Street and First Avenue outside of the Tribune building. -- Tim Engstrom/Albert Lea Tribune

The National Weather Service this morning issued a severe thunderstorm warning for most of Faribault County in Minnesota and for most of Worth, Winnebago and Hancock counties in Iowa and a small part of Kossuth County.

But, strangely, not for Freeborn County. A thunderstorm moved through the Albert Lea area shortly before 7 a.m. This comes after a T-storm rumbled through Albert Lea around 3:30 a.m.

As of 6:30 a.m., the second storm was centered in Kiester. This one, the National Weather Service warned, was capable of producing damaging winds. The storm moved southeast at 60 mph.

The winds, the warning stated, could reach between 30 and 50 mph.

Freeborn County and much of southern Minnesota was in a severe thunderstorm watch this morning, which means the storm was nearby and could strike. Heavy rain began to fall at 6:50 a.m. in Albert Lea and halted in 15 minutes. Many residents lost power to their homes.

A power pole fell over on an automobile in the 400 block of Frank Hall Drive. By 8:30 a.m., many homes and workplaces were without power. Lou-Rich officials were without power and working outside of the building on the vegetation. Farmers State Bank’s Daniel Otten drove around to see what other business had power. While many places near the Albert Lea Tribune were without power, such as Streater, the Tribune building never lost power.

Radar images showed the most severe areas of the thunderstorm at 6:45 a.m. crossing southwest Freeborn County. Hail was a possibility in this storm.

By 7 a.m. the storm was striking Lake Mills, Iowa, and the front edge was just outside of Northwood. Also by 7 a.m., the severe thunderstorm warning for Faribault County was called off. In Iowa, the warning was reduced to Winnebago County and a northern tier of Cerro Gordo County.

By 7:05, Northwood, the seat of Worth County, was being struck by the cell, which seemed headed toward the Charles City, Iowa, area.