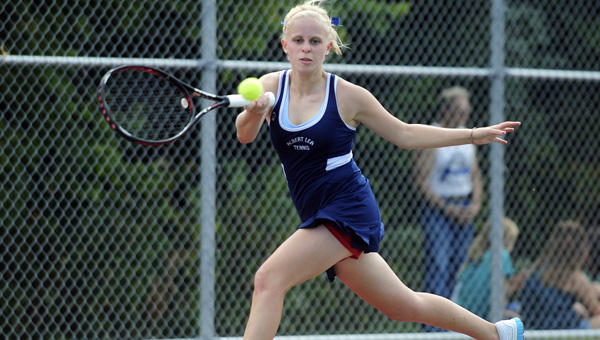 Albert Lea’s Michelle Hartmann streches to hit a forehand Tuesday against Lyle/Pacelli’s Abby Leif Tuesday at No. 1 singles. Hartmann defeated Leif 6-0, 6-0 and helped Albert Lea to its first of the season in its first match. -- Andrew Dyrdal

The Albert Lea girls’ tennis team was on its way to a season-opening sweep Tuesday before darkness cut a home triangular short. 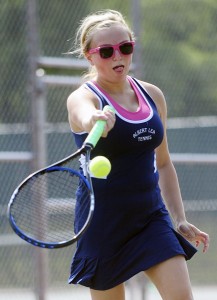 The Tigers beat Lyle/Pacelli 6-1 and led Worthington 2-1 before the second match was called due to darkness. At the time the match was cancelled, the Tigers led 1-0 in two of the three matches into the second set.

The Tigers’ No. 1 singles player, Michelle Hartmann, won both her matches while only dropping one set. The senior beat Lyle/Pacelli’s Abby Leif 6-0, 6-0 and Worthington’s Kate Lesnar 6-1, 6-0.

Prudoehl said he was impressed by his No. 1 doubles team of Karlee Andersen and Kelsey Lenhart in their first-set win over Worthington.

Lyle/Pacelli had only six players on its roster and forfeited at No. 4 singles and No. 2 and 3 doubles. Prudoehl said the Tigers were also shorthanded but filled in varsity spots with underclassmen. 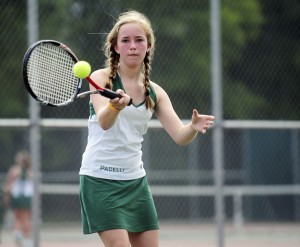