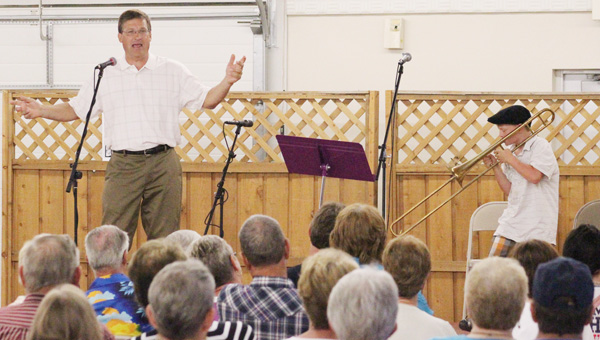 Brad Grotewold, left, and Noah Karge perform “Seventy-six Trombones” during the Touch of Broadway show at 6:30 p.m. at the fair. The shows continue today, Friday and Saturday in the Fairlane Building. -- Kelli Lageson/Albert Lea Tribune

Don’t worry — even if you missed the Touch of Broadway shows at the fair there’s still more to come this week.

More than 100 people stepped out of the heat to watch musical selections from “The Music Man” in the Fairlane Building at 6:30 p.m. Wednesday. Another show was slated for 8 p.m. 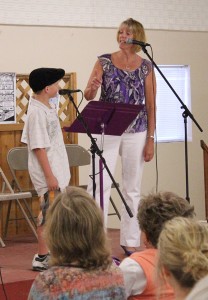 “I thought it was really neat,” actress Roxann Irons said. “This is a great idea.”

“We hope to see a lot of people who have been to the shows and recognize the people,” organizer Gordy Handeland said. “We’ve all been rehearsing and hope to entertain everybody.”

Saturday’s shows, like Wednesday’s, will feature musical highlights from “The Music Man” performed by Irons, Brad Grotewold and Noah Karge. Some of the songs they sang included “Ya Got Trouble,” “Till There Was You” and “The Wells Fargo Wagon.” Shows on Saturday are at 6, 7 and 8 p.m.

“It was excellent,” Segura said. “The last few songs were good.”

He said all three actors had been in the play when ACT put it on last summer. Grotewold thought the first performance did well and was glad he could remember all the lyrics to the songs.

“I thought it went really well,” Grotewold said. “I appreciate having it at the fair.”

The Touch of Broadway shows are new to the fair this year, but may become a permanent fixture if enough people attend shows.

“We just wanted to have well-known music,” Handeland said. “We’ve got some other musicals we can do.”

Handeland said he hopes the shows can continue to bring a different aspect to the fair. Local theaters were advertising the shows they’d be performing in the next year to those who attended the event.

If you go
What: Touch of Broadway shows
Where: Fairlane Building at the fair
When: Shows at 6:30 and 8 p.m. tonight and Friday and at 6, 7 and 8 p.m. on Saturday