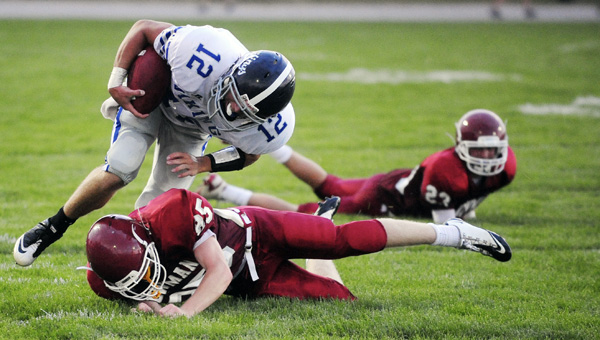 Haberman scored both Vikings touchdowns on an interception return and kickoff return in a 28-12 loss Friday to the Newman Catholic Knights in Mason City.

The Vikings (0-1) held a 12-7 lead in the third quarter, and nearly added to the margin on a drive deep into Knights’ territory, but turned the ball over on downs at the five-yard line and proceeded to allow a 95-yard touchdown drive to the home team.

“That kind of put a fork in it,” Vikings coach Dave Capitani said. “It took any emotion that we had come out with, and we 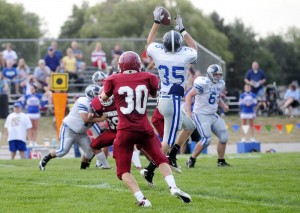 couldn’t get back to the level we needed to play.”

The Vikings opened the game having won five of its last six games, dating back to last fall. The team opened this season, though, without its star, All-State quarterback, Spencer Capitani, who rushed for over 1,400 yards last year.

Dylan Nitcher started Friday for the Vikings and looked comfortable running the team’s fast-paced, wishbone offense. Nitcher rushed for 95 yards on 16 carries and completed one pass in four attempts.

“I was really pleased with Nitcher and how he handled himself as a leader,” Capitani said. “He’s going to do nothing but get better. He missed a few reads and some things but as a whole I was really pleased. He’s just got to make strides each week for us.”

In a sluggish first half, the Knights scored on its first possession on a touchdown run by Joe Burgmeier.

After going three-and-out, failing to convert a third-and-three from its own 28-yard line, the Vikings punted back to the Knights, who had momentum going from its scoring drive.

That momentum shifted quickly as Haberman intercepted Knights quarterback Trevor Callahan near the home team’s sideline and returned the ball for a touchdown. After a failed two-point conversion attempt, the Vikings pulled within 7-6, a score that stood until halftime.

The Vikings offense struggled to move the football in the first half and couldn’t muster a sustained scoring drive. Set to start the second half on offense, Haberman gave the Vikings another break. The senior fielded the second-half kickoff near the Vikings sideline and returned the ball 99 yards for a touchdown and a 12-7 lead.

“Haberman made a couple big plays for us,” Capitani said. “There’s a kid that grew up a lot for us last year and played well down the stretch. That pick was huge and obviously his kick return was huge for us because we struggled moving the ball. Those plays kept us in the game a long time.”

Leading 12-7, the Vikings had a chance to pad its lead in the third quarter. The Vikings drove the ball down to the Knights’ five-yard line but didn’t convert on third-and-five and turned the ball over on downs. The Knights took over and turned in a slow, methodical drive that worn out the Vikings defense. Burgmeier capped the drive with a one-yard touchdown to put the Knights on top for good 14-12.

Newman Catholic’s offensive line overpowered the Vikings in the second half as Burgmeier finished with 241 yards rushing and four touchdowns.

“We’re not real deep up front,” Capitani said. “Our kids got tired and their defense as a whole played very, very well. They didn’t give us a lot of opportunities.

“They do such a good job team-wise in moving the ball around. They find your weaknesses and take advantage of it.”

The Vikings were one of only a handful of teams in Iowa playing on Friday night. The game experience should give the team an advantage Friday against rival Lake Mills, Iowa, who has yet to play a game.

“It’s definitely a plus for us,” Capitani said of the game experience. “It’s going to make us a better football team.”

The Vikings play against Lake Mills at 7 p.m. Friday in Northwood, Iowa.