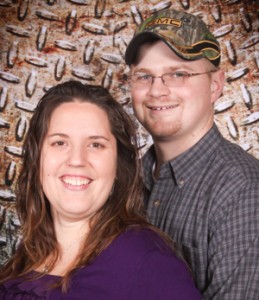 The bride is a 2000 graduate of Winterset High School and a 2004 graduate of University of Wisconsin – River Falls. She is employed at Mercy Arthritis and Osteoporosis Center in Urbandale, Iowa.

The groom is a 2005 graduate of Alden-Conger High School and a 2007 graduate of Riverland Community College. He is employed at Erlandson Implement in Kiester.