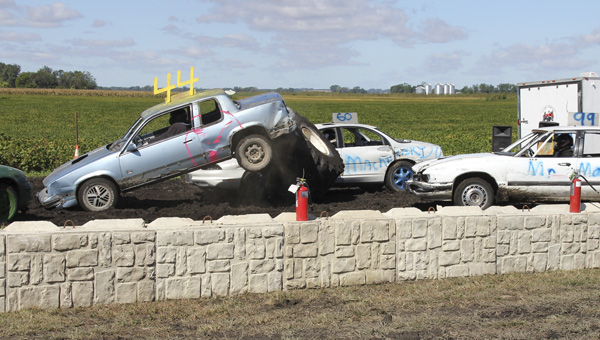 Participants in car football at Hollandale Harvest Festival compete to move a tractor tire across an end zone in a field at last year’s event. Car football is one of the most well-known events of the city’s festival. -- Scott Schmeltzer/Albert Lea Tribune

HOLLANDALE — The annual Hollandale Harvest Festival returns Saturday and is working toward raising money for the fire department. 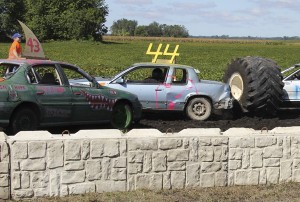 In 2010, participants compete in car football. The event will again be held this year as part of the Hollandale Harvest Festival. -- Scott Schmeltzer/Albert Lea Tribune

Action begins with the Hollandale Commercial Club pancake breakfast at the fire hall. Flapjacks will be served at 7:30 a.m.

Beginning at 11 a.m., football season officially kicks off with car football. The event is slated to be held behind Mr. Machinery. The objective in car football is to move a tractor tire across an end zone.

Immediately following car football will be mud-bog races in the same location.

For visitors more interested in history instead of twisted heaps of cars and muddy four-wheelers, the Heritage Huis Society will have museum tours next to the windmill from 9 a.m. to 3 p.m.

At 1:30 p.m., a kiddie parade will begin on its foot route around the city park block.

The 3-in-1 Bar & Restaurant will hold a bean bag toss tournament at 3 p.m., just before the parade begins at 4 p.m.

As in past years the parade route will line up by the brush dump and will make its way around the south end of the village before ending at the Ag Power implement dealer.

Events wind down with water wars behind S&V Auto. This year there will be two water wars: The first will be keg wars and the second will be bucket brigade.

The festival’s main event will be a street dance from 8:30 p.m. to 12:30 a.m. in front of the 3-in-1 Bar & Restaurant. This year the band Seeds will play for the entertainment of the crowd.

Seeds is an Austin-based band that plays pop and rock tunes as well as their own original tunes. The band most recently played in the beer garden at the Mower County Fair.