Getting back to normal 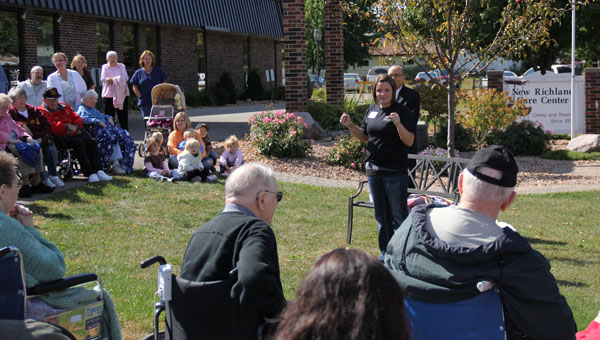 NEW RICHLAND — Though the recovery process was not easy, residents and staff are finally feeling like things are back to normal one year after flooding damaged the New Richland Care Center.

Administrator Mikenzi Hebel said one year later she’s confident with her team knowing that they can get through the challenge of evacuating residents and waiting for repairs to be done. 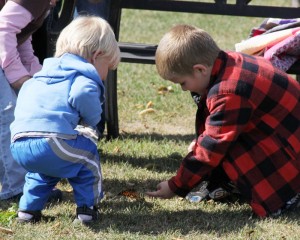 Kids play with butterflies that were released at a ceremony at New Richland Care Center Friday afternoon.

“We have a support system that others don’t have,” Hebel said.

A special ceremony was held at the care center Friday to mark the one-year anniversary of the flooding that kept residents away for about three months.

“The hardest part is they really are our family and they had to go start out new,” Hebel said.

“They’re happy and wanted to be back,” Hebel said.

One resident, Harold Hagen, said he thought the ceremony was nice. He was moved to a facility in Mapleton after the flooding and said he didn’t mind it there but wanted to be back in New Richland. 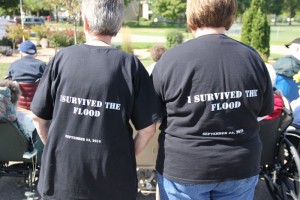 Some of the staff wore “I Survived the Flood” T-shirts at a special ceremony Friday.

“We’re from New Richland so that’s where we wanted to get back to,” Hagen said.

Marilyn Meyer, a volunteer at the facility who often comes for bingo and socializing, said she was a victim of the flooding at her home in New Richland as well. She said she always comes on Fridays but made a point to come see the ceremony.

“I think it was a real nice gesture,” Meyer said.

Around 80 people, residents, staff and guests attended the ceremony Friday. Hebel spoke to the crowd and released monarch butterflies in the garden in front of the facility. The Rev. Paul Andree also spoke and gave a blessing.

“You are very blessed to be here,” Andree said. “I’m so thankful we were able to come back after the flood.”

Water began to rise around the facility on Sept. 22, 2010, and everyone was evacuated upon the recommendation of Waseca County sheriff’s officials. The evacuation took about two and a half hours and residents were transported by ambulances and busses to area facilities. During that time, a massive sandbagging operation was set in motion, with over 350 volunteers, including students, residents and emergency personnel from New Richland and surrounding communities. 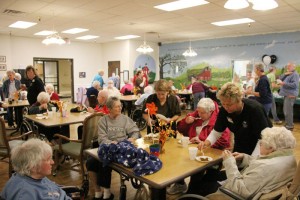 Residents, family members and staff all joined together for refreshments after a short ceremony commemorating one year after flooding damaged the New Richland Care Center.

Despite the sandbagging efforts, water seeped into the building through walls and doors. The biggest damages were to sheet rock and carpeted areas. The facility also had to be disinfected and repainted. Hebel also said air conditioning and heating units in the residential rooms were damaged and had to be replaced.

Hebel said she’s excited for the coming year and to hold a regular Christmas celebration at the facility. She also said there are many events planned for residents because that’s one of the goals of the facility.

“We really try to do things for residents,” Hebel said.