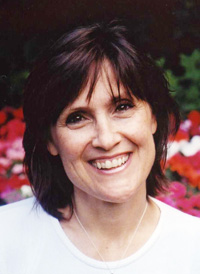 Kristy was born March 2, 1955, in Ottumwa, Iowa, and at the age of 7 moved to Albert Lea. She spent her childhood in Albert Lea and was a 1974 graduate of Albert Lea High School. After graduation, she moved to Denver, Colo., for a year and eventually found her way to Chicago, Ill., where she met her husband Mike and started her family. Since 1994, she has resided in Elyria, Ohio, with her husband and children.

Kristy attended Lorain County Community College and in 2004 received an Associate Degree of Applied Science in sports and fitness management with honors at the age of 48. She was originally diagnosed with breast cancer in 2000 and it had metastasized to her liver in 2003 and was given 6 to 18 months to survive. By getting her degree, one of her many goals had been accomplished and in 2004 she was awarded the Cheri Marie Szucs Memorial Scholarship.

Kristy was an adjunct faculty member at LCCC teaching yoga and also working as a personal trainer at the college. In 2010 she was awarded Adjunct Faculty Member of the Year in the HPER Department. She was an NSCA certified personal trainer, AFAA aerobics and fitness certified and a certified yoga instructor. Although Kristy fought cancer for nearly 12 years, undergoing numerous chemotherapy treatments, including clinical trials almost monthly during this time – health and fitness were her driving force and enabled her to overcome the sometimes crippling effects of the treatments. She never succumbed to the disease but fought it every inch of the way and became an example of strength to everyone she met. Her positive attitude was an inspiration to us all and touched many lives over the years both young and old.

Kristy grew up in the Catholic faith and continued it at St. Jude Church in Elyria, Ohio. Her children attended St. Jude School and Elyria Catholic High School.

(John) Frydenlund of Albert Lea and Kerry O’Brien of Minnetonka; along with numerous nieces and nephews.

She was preceded in death by her brothers: Kevin (JB) O’Brien of Albert Lea and Brian (Rhonda) O’Brien of Arvada, Colo.; brother-in-law, Chuck Faith of Minnetonka; and father-in-law, Melvin (Dick) Wetzel of Elyria, Ohio.

The family will receive friends from 4 to 5 p.m. Sunday at Lorain County Community College Stocker Center, 1005 Abbe Rd. North, Elyria, OH 44035. Celebration of Life Service, a tribute to Kristy’s Life and a time of sharing with the family will follow from 5:30 to 7 p.m. The Rev. Charles T. Diedrick will officiate.