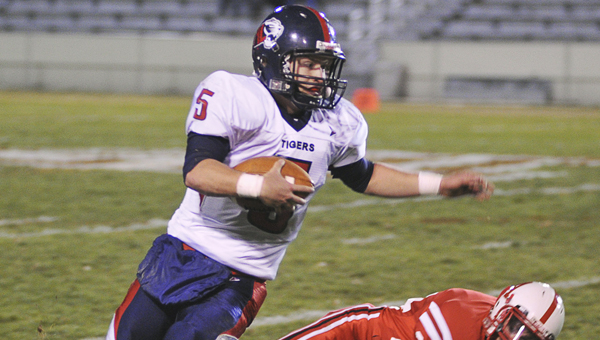 Albert Lea quarterback Ethan Abben holds on to the ball himself on a run against Austin in the third quarter Wednesday night in Austin. -- Eric Johnson/photodesk@austindailyherald.com

AUSTIN — The Albert Lea Tigers knew the game against the Austin Packers was theirs for the taking.

Head coach Max Jeffrey even said after their loss to Faribault that they would win this game.

The Tigers seized their moment with 38-19 victory in Austin on Wednesday night.

“We had plenty of opportunities and momentum swung our way,” said Makael Lunning, Albert Lea’s runningback, who ran for three scores during the game. “This is huge and it’s a big win for us.”

Albert Lea began the night’s scoring when Lunning took a hand off and scampered 20-yards into the endzone for a Tigers’ score. 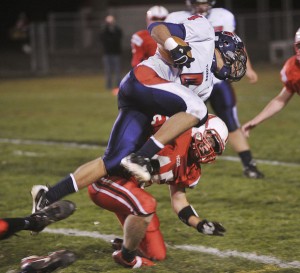 Albert Lea running back Makael Lunning is upended by Austin’s Anthony Condit during a run in the first quarter Wednesday night in Austin.

Austin battled back and took a 13-9 lead when Anthony Condit plunged in from a yard out with 8:12 left in the second quarter.

The Tigers (2-6 overall, 2-5 Big Nine) scored the next 29 points unanswered as they dominated the third quarter.

“They played really hard and we really battled in the first half,” said Max Jeffrey, Albert Lea’s head coach. “Austin came out fired up.”

Shea Svendson hit a 37-yard field goal with 3:27 left in the first half and Ethan Abben added a 15-yard scramble for a score on third-and-10 with 20 seconds left in the half.

The game was one of the few times this season in which the Tigers’ running game got off of the ground.

Jeffrey attributed the ground game to the matchups along the offensive line and the Tigers’ ability to hit the holes quickly.

“It was nice to grind some things out,” the first year head coach said. “The guys hit the holes and it was fun to see.”

Albert Lea took advantage of good field position to start the second half, converted drives of 14 and 22 yards for touchdowns.

Lunning had an eight-yard rushing touchdown and a 14-yard scoring run to cap those drives.

“I just saw the open holes and went through them,” Lunning said.

Today, Albert Lea will learn who they will face in the opening round of the section tournament.

Jeffrey believes the Tigers will draw either New Prague or Northfield, with the Tigers having an outside chance at a home game at Hammer Field.

The opening round games are scheduled for Tuesday, Oct. 25th.

At least the Tigers will enter that game coming off of a much needed win.

“It’s great,” Jeffrey said. “If we would have gotten beat tonight it would be tough to get going. When you get a win the players are more coachable.”