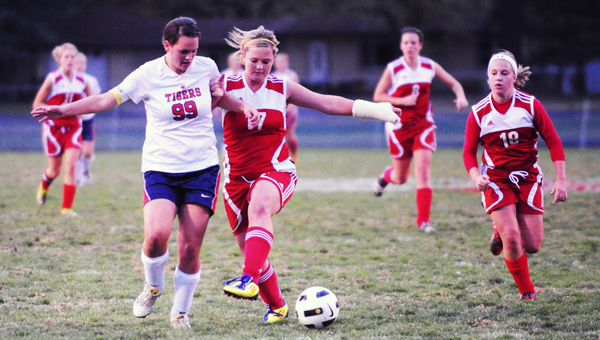 Having the top seed in any tournament is a big deal.

The No. 1 ranking carries high expectations and, in most cases, pins a target on your back.

Other teams have nothing to lose when they play against you, they have no where to go but up.

Rick Barnhill and the Albert Lea Tigers got their first look at what it is like playing as the No. 1-seed against the Austin Packers on Saturday night at Hammer field.

The Tigers escaped with a 1-0 victory over the No. 8-seeded Packers, but it wasn’t pretty.

“This was ugly,” said Barnhill, after the game. “Austin outplayed us. They had determination and just played with a free spirit.”

“We played very tight like we had everything to lose, which we do. When your No. 1 you have no where to go but down.”

Albert Lea looked nervous and out of rhythm to begin the contest. The Tigers were losing the battle on all levels of the game. They were being outhustled and outplayed for a majority of the first stanza. 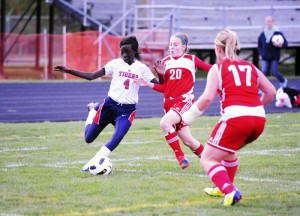 Finally, during the 24th minute, Albert Lea caught a break.

Brooke Hanson sailed a beautiful cross into the box off of a corner kick. Austin goal keeper Chloe Summerfield tipped the ball over her head, opening the net for Hannah Savelkoul to bury the ball into the net for the games lone tally.

“I just kick where ever I see the goalie is not going to get it,” Hanson said. “But where they can get close.”

Austin threatened the Tigers net late in the contest with a fury of crosses and action in front of the Tigers goal.

With under two minutes to go, the Packers had Albert Lea on there heels. Barnhill decided it was time to pull his forwards and send as many defenders into the box to protect the one score lead.

“Toward the end I started taking off forwards and putting on defenders,” he said. “It didn’t look like scoring was going to happen. We just weren’t creating anything.”

Even with the Tigers loading their box on defense, the Packers were able to get a quality look on a throw in.

Austin freshman Carolyn Hackel launched a flip-throw into the box, which found the head of teammate Nicole Lipari. Lipari was in great position to score but knocked the ball high over the cross bar.

“The flip through was pretty scary,” Hanson said. “I thought that was going in. It seemed like we were playing not to lose, but we didn’t.”

The Tigers will now host the Section 2A semifinal round at home on Tuesday at 7 p.m.. Albert Lea will play the No. 5-seeded Saint Peter Saints, a rematch of last season’s section semifinal. Saint Peter is the defending section champions.

“We have our nemesis Saint Peter, who is after our two straight section titles in a row record,” said Barnhill. The Tigers won back-to-back titles in 2007 and ‘08. “We have a chance to control that right now and that is on our minds.”

“Hopefully Tuesday we will come out and give a better showing. I know this, we can’t play like this and win on Tuesday.”