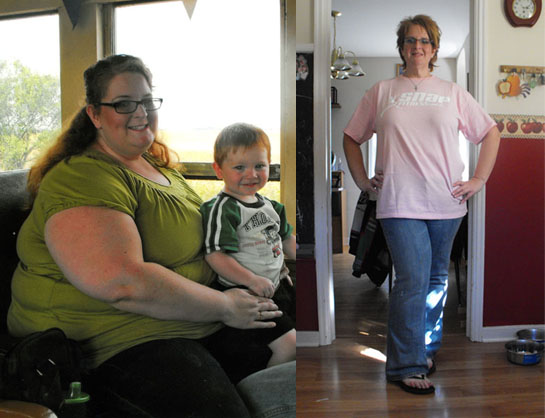 Left: Kelly Kennedy holds her son, Brecken, in the summer of 2010. Right: Kennedy poses for a photo recently. Since she’s lost more than 200 pounds she has inspired others to start their own weight-loss journey.

Two women, helped by a local trainer, have had major successes in their weight-loss journeys and goals for healthier lifestyles.

Joe Tscholl, of Snap Fitness in Albert Lea, has been training Melissa Graves and Kelly Kennedy. He also paired them up to help motivate each other because they have similar goals. 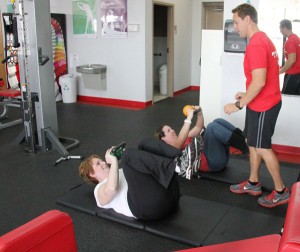 “I’m loving every day of it,” Tscholl said. “That’s why I’m doing what I’m doing — to make a difference in people’s lives.”

Kennedy said Tscholl and Graves have kept her motivated, so motivated in fact that she has lost 205 pounds to date. She credits Weight Watchers for losing the first 75 pounds, and the rest have been through diet and exercise.

“Mel’s kept me motivated,” Kennedy said. “I want to look as good as she does.”

Kennedy and Graves have a goal to run a marathon together, and they’re motivated by all sorts of challenges. Recently Tscholl challenged the two to do their own triathlon of swimming, biking and running.

“I would never have been able to do that before,” Kennedy said. 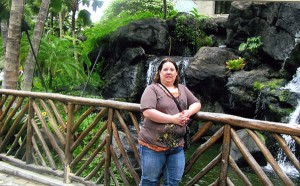 Melissa Graves prior to the start of her successful weight-loss journey. -- Submitted photo

Graves and Kennedy have been achieving goals they didn’t think possible including 5k and 10k races. Kennedy has also enjoyed not being too tired to play with her children or run in the park with them. Her new healthier lifestyle has also had positive effects for her family’s health because they are seeing her success.

Kennedy said though workouts are grueling and the process is hard work, it has all been worth it. She plans to go back to school to become a master trainer and wants to show people that they can lose weight without surgery or other means. Graves agrees that the work has been worth it, and she’s lost 87 pounds since starting her weight-loss journey.

“I’ve had ups and downs, but I don’t want to go back,” Graves said. 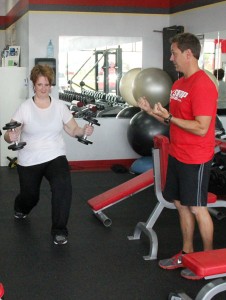 Trainer Joe Tscholl works with Kelly Kennedy at Snap Fitness. Kennedy has lost more than 200 pounds with the help of working out and Weight Watchers. -- Kelli Lageson/Albert Lea Tribune

Though injuries and a pituitary tumor have been hurdles, Graves has worked through the frustrating issues and hopes to get back into her former hobby of swimming. Graves enjoys running and working through Tscholl’s workout regimens. She said he also asks about her diet, gives her meal plans and helps to keep her accountable.

“The first three things I ask are how often do you work out and what do you eat and drink,” Tscholl said. “Those are the key to why you aren’t or why you are losing weight.”

He said when he first meets a potential client he asks them their goal and they work out a realistic way to achieve it.

“Everyone who comes to me has a goal,” Tscholl said.

Both women said they had been told they wouldn’t be able to lose weight and are glad they believed in themselves. They said having each other to work out with has been a huge help and recommend people find a friend or neighbor to keep each other motivated to be healthier.

“Don’t give up on yourself,” Kennedy said. “You are your best ally.”