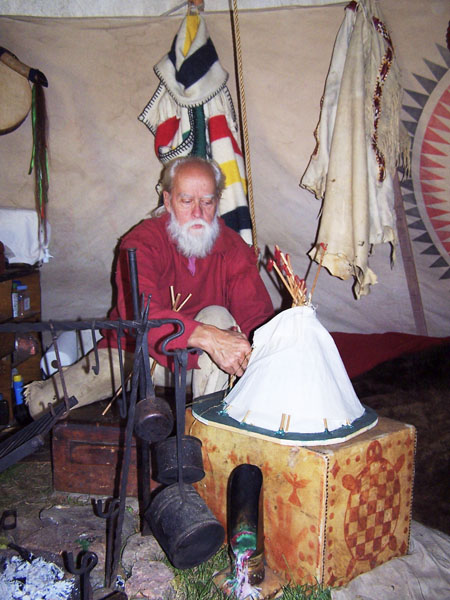 Jerry Schaefer of Madison Lake uses a small model to explain how to construct a Native American tepee like the one he’s sitting in. -- Amy Wasson/for the Albert Lea Tribune

By Amy Wasson, for the Tribune

Dane Bush ducked his head when entering a handmade tepee at the Big Island Rendezvous & Festival on Saturday and joined Cara Johnson, who was already seated inside listening to the tepee’s owner.

The young couple noticed detailed construction directions posted outside the towering, canvas-covered structure. By the time they’d made their way inside, they were already dreaming of having one of their own.

The tepee was the festival-weekend residence for Jerry and Mary Anne Schaefer of Madison Lake. They were dressed in clothing typical of the early American fur-trade period, most of which they made themselves. 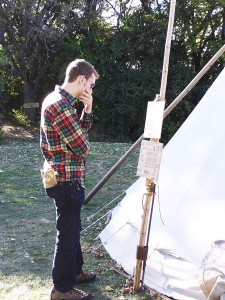 Jerry sat straddling a low wooden chest behind the cooking fire, pointing out the numerous items around the tepee that he’d made himself.

He grabbed an ornate deerskin shirt hanging behind him and explained how it was made through a process called brain tanning. Starting with rawhide from a deer or buffalo, the hide is denuded of hair and allowed to dry.

Once dry and the epidermis (the outer layer of skin) removed, the animal’s own brain tissue is forced through the fibers of the hide using a laborious rolling and stretching process.

“You’d be better off working at Walmart,” he said, when asked how much a person could make for each brain-tanned deer hide.

In response to questions from Bush and Johnson, Schaefer picked up three small sticks and showed them, step-by-step, the construction and set-up process for his tepee. The Schaefer’s 22-foot tepee is larger than the normal 12- to 18-footers (measured from the entrance, straight across to the back). There were at least eight places to sit, not including the buffalo-hide covered bed at the back. Using a small model of the tepee, Schaefer showed them how various canvas pieces fit together and wrap around the named and numbered poles, each pole serving a specific purpose.

“It’s a full-time job,” Schaefer said, referring to all the tasks required of those who lived in tepees.

He theorized that men who spent their time hunting game and battling each other had multiple wives in order to keep up with all that must be done: maintaining the fire, putting out sparks, watching the ribbons that blow in the breeze off the bonnet (the poles that stick out the top) to check for changes in the wind, changing the smoke flaps to match the breezes, raising and lowering the lowest and outermost level of canvas in order to regulate the temperature inside.

The Schaefers have been attending the Rendezvous in Albert Lea since 1991, when they purchased this tepee, their largest and favorite. They now own five tepees and participate in numerous festivals of this type throughout each spring and summer, greatly enjoying the weeks spent living this nomadic lifestyle.

However, as comfortable as their tepee is, Mary Anne confessed that on Saturday morning, when the temperature was in the low 30s, they decided to sleep in, staying tucked under their pile of blankets until they could no longer see their breath in the cool air of their tepee.