Kids flew for free on Sat. 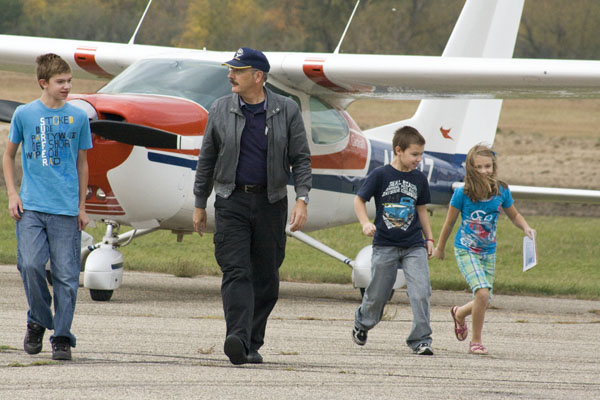 Children flying with pilot Chuck Sandager are all smiles Saturday after landing back at the Albert Lea Municipal Airport during the Young Eagles Flight Rally. -- Sarah Stultz/Albert Lea Tribune

As part of the Experimental Aircraft Association’s Young Eagles Program — set up to interest young people in aviation — children learned more about how airplanes work and the basics about what goes into flying a plane.

“It’s a great program to expose children to flying,” said Paul Stieler, who volunteered at the event. “It’s to create interest in aviation — and it’s fun. Kids get really excited about it.”

For some of the children, it was their first time seeing a plane up close, let alone flying in one. They had to be at least 8 years old to participate.

After running through the program and receiving a free 10- or 15-minute flight, the children were designated Young Eagles. 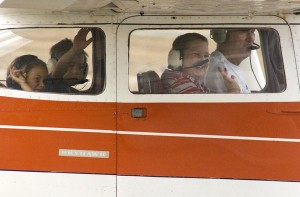 Lilyana and Devon Pohl, back, and Jacob Lamp, front, wave to their family members before taking off for a flight during the Young Eagles Flight Rally at the Albert Lea Municipal Airport. -- Sarah Stultz/Albert Lea Tribune

Though there were a handful of children who seemed apprehensive about flying at first, “by the time the ride is over they’re beaming from ear to ear,” Stieler said.

Following the flights, each child received a certificate making them an official Young Eagle and were given their own personal logbook.

“I think that was the most awesomest ride ever,” said one child, Devon Pohl, who was at the event with his sister, Lilyana.

Another youth rider, Deb Dyvig, said she enjoyed her ride and noted that everything looked like “a little playground” from up in the sky.

Stieler there hasn’t been a Young Eagles Flight Rally at the Albert Lea Municipal Airport for a couple years, but organizers hope to make the rally an annual event.

“The big bonus is the smiles on the kids faces,” said Chuck Sandager, one of the volunteer pilots.

Since the program was launched in 1992, volunteer Experimental Aircraft Association pilots have flown more than 1.4 million young people from 90 countries.

The Young Eagles web page can be found at www.youngeagles.org.