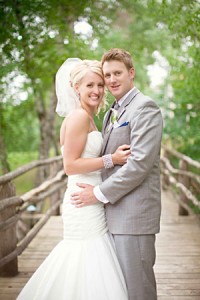 Kaeli Wayne and Derek Goodnature were married at 4:30 p.m., July 23, 2011, at East Gull Lake, outside of Brainerd. The Rev. Mark Boorsma performed the double-ring ceremony.

Parents of the groom are Randy and June Goodnature, of Albert Lea.

Grandmother of the groom is Joanne Hanson, of Albert Lea.

Krista Linn, of Omaha, Neb., was the personal attendant.

Flower girl was Lainee Krohn, goddaughter of the bride, daughter of Tim and Brooke Krohn, of Geneva.

Kaeli is a 2006 graduate of Albert Lea High School and a 2010 graduate of Gustavus Adolphus College with a Bachelor of Arts in nursing. She is an RN at Nine Mile Creek Senior Living in Bloomington.

Derek is a 2003 graduate of Albert Lea High School, a 2005 graduate of Iowa Central Community College and a 2008 graduate of Augsburg College with a Bachelor of Arts degree in communications. He is an agent at Truck Writer’s Inc. in Minneapolis.

A reception was held at The Legacy of Cragun’s.

After a wedding trip to California, the couple resides in the Twin Cities.