I’d give you the shirt off my back 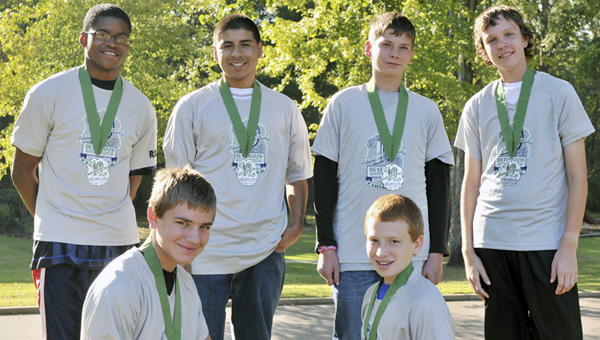 There is a wonderful nonprofit organization in Memphis, Tenn., named Youth Villages — a national leader in helping children who struggle with the effects of abuse, neglect and trauma. They have a fantastic and highly successful running program for the children in their care. This is an account of how one lost shirt led to another replacing it, which led to the gift of a shirt, which ended up being donated, which has inspired close to 3,000 (and counting) running shirts being sent from race directors on all seven continents to encourage and inspire the young runners at Youth Villages.

I’d been running marathons for years as a St. Jude Hero to raise money 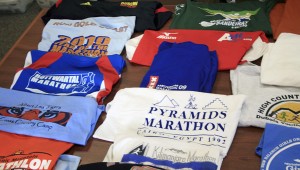 Pictured are some of the 3,000 shirts donated to Youth Villages. -- Submitted photo

for the St. Jude Children’s Research Hospital in Memphis. Finally, in December 2009, I was going to run the actual marathon named for this epicenter of compassion — the St. Jude Memphis Marathon. Having raised close to $25,000 from hundreds of family and friends for this event, I wanted to personally hand deliver the money while in Memphis. Lori O’Brien, then a senior vice president at American Lebanese Syrian Associated Charities, the fundraising arm of St. Jude, agreed to accept the funds on behalf of St. Jude the day before the marathon. While visiting with Lori, she shared that she would cheer for me at Mile 7 where she usually watched the marathon from. Although I am a hardy Midwesterner, hearing the morning forecast was to be 33 degrees at race time, I figured I’d wear my long sleeve Boston Marathon finisher shirt from 2008 that I’d brought along and when it warmed up I could just carry it. Now I had in mind to toss it to Lori at Mile 7 and she agreed to mail it back to me.

Indeed the next morning there was Lori at Mile 7. I’d warmed up nicely and tossed it to her. Lori stashed the shirt in the bushes for safe keeping while she finished working Mile 7, and when she went to retrieve it, the overzealous clean up crew had gotten there first and it was not to be found. Two days upon my return to Minnesota, I received a devastated e-mail admitting the oversight and Lori’s grief at its loss. I tried to console Lori that I was not upset at all, and asked her to please forget it. To this day, I have no idea where she obtained the brand new 2008 Boston Marathon shirt that arrived in my mailbox on the farm about a week later!

Fast forward to this summer of 2011. Our local high school cross country team in Albert Lea, who I volunteer with as a coach, came up with a great running shirt for the summer running camp. I felt compelled to send one to Lori, who was also a runner, as a special thank you to her for having gone the extra mile to replace my special shirt almost two years earlier. Upon receiving the shirt, Lori, bless her heart, donated the shirt to the Youth Villages running program where she was now their national development director. Their running program was having a banquet where the children could win prizes and draw from a special table of items. One of the young runners chose the Albert Lea Tigers cross country shirt and was beaming, Lori shared! Other children seemed to be coveting that particular shirt.

Figuring that if one running shirt brought that much joy to one child, what would happen if I could come up with a campaign to obtain running shirts for Youth Villages? Having run probably a hundred distance races, I’d seen plenty of races where there were leftover shirts, even from previous years being peddled to the runners. What would happen if I contacted race directors from around the world about considering sending new, left-over race shirts to collect for the Youth Villages running program? These could be given to the children to train in, run races in, win at banquets and be awarded for reaching running milestones.

And the icing on the top (of the world) and the bottom (of the world) were shirts from the North Pole Marathon, and the Antarctic Ice Marathon. Shirts from all seven continents. Even finisher medals (close to 500 from various races).

Volunteers where I work at Agilis Company folded the shirts by size and placed them in boxes. Lon Beckius at Alamco Wood Products in town built two large wooden crates for the boxed shirts and Dan DeBoer of Pro Trucking, had his semidriver, Bryan Hill, deliver the almost 3,000 shirts to Youth Villages in Memphis without charge.

A large World Map has been put up in one of the facilities at Youth Villages, and as the kids receive shirts, they put a pin in the world map to indicate where the shirts came from (an invaluable geography teaching moment). Kids that have already received some of the finisher medals from races like the Deadwood Half Marathon in South Dakota, apparently won’t take them off because they are so treasured, and one kid still had his on after five straight days! Lori shares that the kids are so incredibly encouraged and inspired with these shirts and are “treating them like gold” and says “it is amazing how so many people are reaching across continents to help these children have a better life.”

The running community around the world has been extraordinarily generous to come alongside this effort. It has been a joy to see this outpouring of support. It is very moving and encouraging to know that there are people around the world who will give you the shirt off their back.

I am especially excited that I have an opportunity to run with the kids at Youth Villages in early December in Memphis and actually run the Memphis Half Marathon on Dec. 3 with one of the teens being helped by Youth Villages who will be participating in his first long distance race. It is my great hope to be an encouragement to Jarrett, as we run the 13.1 miles together. I am certain he will grow from the experience and be tremendously fulfilled in having persevered in the challenge. He will no doubt bring much inspiration to me. I am also in the process of actively fundraising for Youth Villages through this great venue.