Medical care in a tent 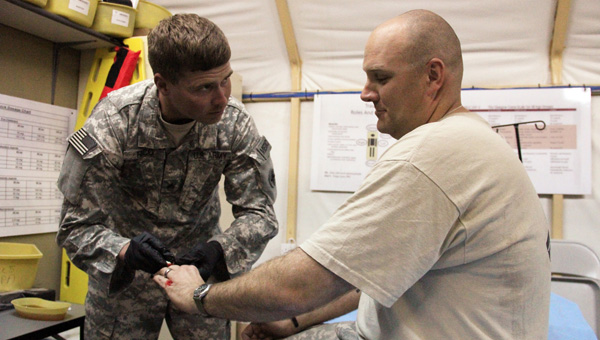 Editor’s note: This is the third in a nine-part series on Minnesota National Guard soldiers deployed to Kuwait.

CAMP BUEHRING, Kuwait — With a military base that can hold thousands of soldiers and has a constantly fluctuating population, it’s imperative to have the best medical care possible.

One of the medical facilities on the base is the Battalion Aid Station, or BAS. It is run by Sgt. 1st Class Trevor Gibbs of Owatonna. Within the battalion there are three medics: Gibbs, Staff Sgt. Matt Tentis and Staff Sgt. Mike Budahn, and 1st Lt. Daniel Gurtner, all of the Headquarters Company of the 2nd Battalion, 135th Infantry Regiment, within the 34th “Red Bull” Division.

The BAS is much like a clinic in civilian life, except it is in a tent. More serious injuries are treated at the Troop Medical Clinic, or TMC, or at other bases, such as Camp Arifjan, where more equipment is available. 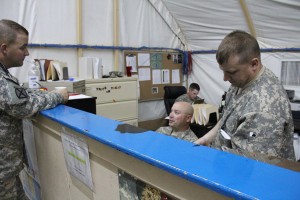 Medics talk with each other during a rare slow time at the Battalion Aid Station Monday afternoon.

Along with the three main medics, there are 17 line medics, some from each unit, who work at the BAS on rotations. Delta Company’s line medics include Sgt. Adam Rosendahl, Spc. Ryan Henderson, Spc. Noah Snater, Spc. Daniel Neal and Spc. Ryan Olsen. Sgt. Kelsey Noss is a line medic with Austin’s 1135th Combat Support Company. Much of the training for the medics is done by the physician assistants at the BAS, including Capt. Anthony Valentine of Duluth.

“I love treating soldiers,” Valentine said. “We try to keep these guys as healthy as possible to get them home to their families.”

Valentine described most of the injuries they see at the BAS as “run-of-the-mill,” including sports injuries like minor muscle complaints. They also have what he calls “G.I. complaints,” or diarrhea, nausea or vomiting. Soldiers also come to the BAS with minor colds or coughs. In his six-month tour, Valentine did see a case of acute appendicitis.

“We took him to Arifjan, where they have a surgical clinic,” Valentine said.

There have been very few cases of dehydration, which Gibbs attributed to soldiers being trained well. They learned to stay hydrated and pay attention to their bodies during training at Fort McCoy, Wis., where it was warm and humid.

Gibbs said the BAS has a fully functioning pharmacy, and mostly treats and stabilizes soldiers. Because they don’t handle any emergency cases, those are taken care of at the TMC, where they’re able to have labs and tests done.

Gibbs said they choose when to be open for sick call, and the BAS is usually open from noon to 6:30 p.m. unless it needs to be open longer. The 2nd Battalion shares the facility with the 1st Squadron, 94th Cavalry, part of the same infantry division out of Duluth. The hours are different for the other unit, and is usually open a few hours in the morning and a few in the afternoon. Patients are all treated in the same fashion.

“They check in at the front and are seen by a medic who screens them,” Gibbs said. “

After the screening the soldier is either given medication, referred to another location or returned to duty if the ailment isn’t severe like the common cold.

Monday afternoon around 2 p.m. Staff Sgt. David Good of Lakeville, who is in Alpha Company, visited the BAS after his hand was injured working on an MRAP, or Mine Resistant Ambush Protected vehicle. It was a minor hand injury that medics Sgt. David Rico and Sgt. David Wallace were helping with before Valentine stepped in to finish up.

What’s in an exam room

Exam rooms, of which there are seven at the BAS, include a stretcher the patient can rest on. All exam rooms include a laptop computer and a supply closet. Also stocked are plastic gloves, hand sanitizer and other items like hydrogen peroxide and cotton supplies.

The BAS also has a waiting area, front desk, offices and a pharmacy.