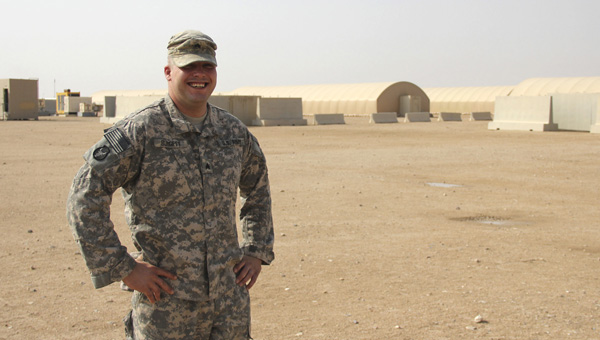 Sgt. Jacob Burgett, 28, smiles for the camera at Camp Buehring in Kuwait. He’s been in the National Guard for almost nine years, and this is his second deployment. -- Kelli Lageson/Albert Lea Tribune

CAMP BUEHRING, Kuwait — A soldier from Emmons first joined the National Guard because his grandpa had been in the military.

Sgt. Jacob Burgett, 28, is in Albert Lea’s Delta Company; he’s been in the Guard for almost nine years. His grandfather, Earl Towne, of Emmons, was part of his inspiration for joining. He used to wear his grandpa’s dress uniform around when he was little.

“I hope I made him proud,” Burgett said.

Burgett has been deployed before to Iraq from 2005-07. He said the deployment to Kuwait is a little slower tempo and that’s OK with him for now. He said he’s got friends in the company who have been to both deployments like Sgt. Michael Bakken.

“I’ve got a lot of good friends here,” Burgett said.

Burgett is a vehicle commader, so he’s in charge of three to four guys at a time and the vehicle they’re in while on missions.

While he’s not working at Camp Buehring or on missions, he likes to work out with friends, and they usually go to the gym in the mornings together. He also likes to talk to his two sons, Aidan, 3, and Noah, 2, on the phone. He usually calls around 4 p.m. Kuwait time and talks to them, which is around 7 a.m. Minnesota time. They live in Kiester with their mother.

He’s planning on this being his last deployment, and has no plans to re-enlist when the time comes in less than a year.

He wants to spend more time with his sons, and plans to look for a job when he gets back from the deployment.

“I’ll look for something when I get back,” Burgett said.

Burgett also enjoys hunting in his spare time back in Minnesota. He joked that he needed to pass all his knowledge on to the younger guys before he left the military.

Burgett is the son of Kirk and Judy Burgett, of Emmons, and he said he hopes they’re proud of him and likes when he is able to call them once and a while from the base.

He said he doesn’t mind being deployed because he likes being employed and making money, and that he’s got good friends to spend time with while overseas. He doesn’t think he’d like being anything other than in the infantry.

“I’ve always been an infantry man,” Burgett said. “I think this is where I’m supposed to be.”

Burgett said he’d like to thank his friends and family for supporting him during his deployment including friends Chance Foley, John “Ducky” Dolsun and Lindsey Heidemann and brother, Jarvis.