What about a knob on the steering wheel?

By Jacalyn Sticha, Ask a Trooper

I am an AARP defensive driving instructor and was asked about spin knobs on steering wheels, in this case for a stroke victim with limited use of one arm. Are there requirements or laws dictating the use of this device? 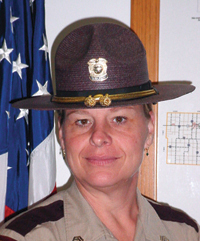 The Driver and Vehicle Services Division of the Minnesota Department of Public Safety provided the answer, and really there are no laws that address this device directly.

This is how it works. A restriction may be put on the person’s driver license that they must use it, just like when eye lenses are required. A driver’s license evaluator or a doctor determines if a person must use such a device through their particular evaluation; it is then a requirement.

There are general rules that give the evaluator and the doctor the authority. If a person would like to get rid of the spin knob, and it is listed as a license restriction, they would have to go back to test without it and, of course, pass.

Information and resources with regard to this device and numerous others that can assist a disabled driver can be obtained through Courage Centers; www.couragecenter.org or 1-888-846-8253.

Other devices can be used to assist drivers: throttle extenders, seatbelt extenders, zero gravity steering and joystick steering, just to name a few. The goal is for handicap or disabled people to maintain their mobility; an important part of life.

Did you know that school bus travel is nearly eight times safer than travel by passenger vehicle? School buses account for 0.2 percent of all fatal crashes. The high and energy-absorbing seat backs closely spaced imitating an egg carton and the weight of the school bus help keep our children as safe as possible.

Did you know engineers designed the school bus to slow down and spread the crash forces over the entire body of the bus, reducing the force overall?

Did you know that less than 3 percent of school bus crashes occur when the stop arm is out and in 2010 there were only three injuries recorded while the stop arm was out?

We have come a long way in the last few decades, but we must still strive for zero deaths. As parents we need to take the time to properly restraint our children; a huge part of this is reading your child seat and vehicle manual. Finally, explain to your children how the school bus protects them and how they can help maximize the effort.

Jacalyn Sticha is a sergeant with the Mankato district of the Minnesota State Patrol.