3rd time is a charm 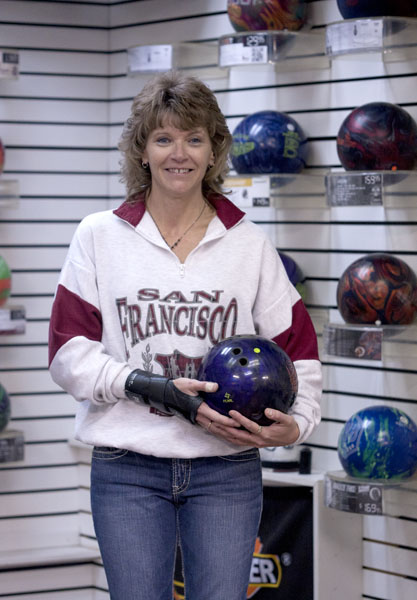 Linda Hanna stands with her ball at Holiday Lanes. She has been bowling since she was 9 years old. On Nov. 30, Hanna scored her first 300 while subbing in on a men’s classic.-- Brandi Hagen/Albert Lea Tribune

Three weeks later, she suffered from three brain aneurysms. She had no feeling in the right side of her body. With her bare fingers she could pull hot racks out of the oven and not feel a thing.

As a right-handed bowler, Hanna was encouraged to keep bowling, as it would be good therapy for her.

Within five months, Hanna had her bowling shoes on and was back on the lanes with her 15-pound ball. Without any practice, she just gave it a try.

“I was nervous,” said Hanna. “I was hoping I could throw the ball in the right direction.”

The ball went right where it was supposed to go, but Hanna said by the third game, she was pretty worn.

“I still had the same pattern, it was just the strength,” said Hanna.

On Nov. 30, Hanna, 48, became the third woman at Holiday Lanes to score a 300 during league. The best part for Hanna, she was subbing in on men’s classic night.

She said she received some funny looks but was then showered with hugs.

Ever since she was 9, the bowling alley has been like a second home for Hanna, who was then Linda Godtland. It was something her parents were really into and shared with her. Her father has passed away but her mother makes sure she gets out to watch Hanna every week.

When she got her 300, other bowlers who knew Hanna’s dad, made sure she knew he was watching in spirit. Hanna received flowers from her mom at work with a card attached, “sent from heaven.”

At the age of 17, Hanna had a chance to go pro. Without regret, she turned it down because it was too difficult to leave her high school, family and friends behind.

Even though her bowling was a huge part of her life, Hanna made sure it didn’t become the most important thing.

“I’m not so serious on everything in life,” said Hanna. “I go day by day. I’m 50 percent Danish and 50 percent Norwegian, and I’m strong either way. It’s just amazing that I can even bowl.”

Serious or not, Hanna said she would still like to have an 800 series someday. Every year she tells the women she bowls with that it’s her last. They just tell her OK, whatever.