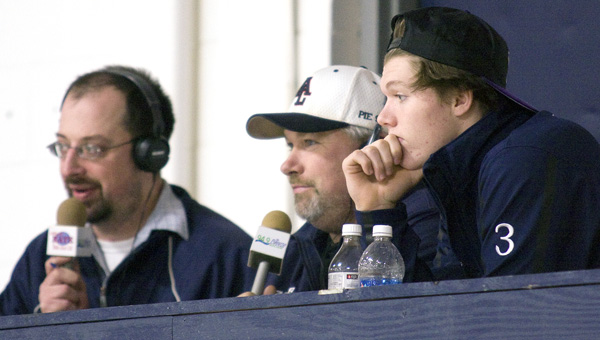 Albert Lea sophomore Shea Svendsen, right, sits on Tuesday alongside his dad, Steve, center, who provides commentary for KATE Radio’s hockey coverage and Aaron Worm, who does play-by-play. Tuesday’s game at Roy Nystrom Arena against Mankato East was the first competition for the Tigers boys’ hockey team after Svendsen sustained his fourth concussion during practice on Dec. 16.

By Kat Ladwig
for the Tribune

At age 12, Shea Svendsen lowered his head during a Minnesota Mavericks youth hockey game against the Wisconsin Blaze in Cottage Grove. He doesn’t remember the hit, only the blood coming from his mouth after the play.

Three years later, as an Albert Lea freshman, he traveled to Rochester John Marshall for a varsity hockey game. With 10 minutes left in the third period, he braced his body to check an opponent into the boards. Their helmets collided, dizzying Svendsen. He played the following Thursday against Rochester Century, and after no memory of either game, Svendsen was diagnosed with his second concussion.

In a game against Sioux Falls later that season, Svendsen turned on the ice, lost an edge and began falling. He never saw the opponent gunning for him from the center circle. Svendsen’s skates lifted into the air just before his head made contact with the hard ice, cracking his Messier helmet wide open and causing his mouth guard to slide 30 feet after impact. He received his third concussion diagnosis shortly after.

On Dec. 16, the Albert Lea sophomore added a fourth concussion to his list of hockey-related injuries after a couple of hits against a teammate and the glass in practice. Again, his memory was foggy.

“I don’t know how I got that unbalanced after the first one, because it really wasn’t that hard of a hit,” Svendsen said. “And the second one just kind of finished me off I guess.”

Concussions haven’t prevented Svendsen from playing the sport he loves — but they just might. According to research by The Franklin Institute, after suffering one brain injury there is a three-times greater risk for a second injury, then an eight-times greater risk after that.

Svendsen’s parents Steve and Jolene, aware of the statistics, discussed the possibility of discontinuing hockey for the season, if not longer, considering Svendsen also participates in baseball and football.

“You can get a concussion in a car accident, even just falling funny. With his history, it’s going to be that much easier for him to get one,” Jolene said. “We just don’t want him to have problems later on in life.”

One of the leading global researchers in concussion prevention and management at the University of North Carolina, Dr. Steve Marshall, said that though science is still in the “primitive state” of understanding the severity concussion damage, researchers have a much better understanding of the brain than even five years ago.

“Very demanding physical sports, like hockey, age your body. Something similar seems to occur in the brain. We accelerate the older age diseases of the brain through repeated injury,” Marshall said.

Svendsen admits that the emerging information is disturbing.

“Yeah, it’s scary. I’ve had talks with my mom about it, and how I could have brain damage if I keep playing, so I need to be careful,” Svendsen said.

His dad also expressed concern about the information that researchers have not yet discovered.

“I think the stuff they’ve learned is good, but we still don’t know the long-term answer to these things,” Steve Svendsen said. “I just know taking hockey away from Shea, well, it would suck the life right out of him.”

While Svendsen and his family weigh the pros and cons of continuing with hockey, Marshall said Svendsen needs to do everything possible, such as using the proper equipment and perfecting his blocking technique, to prevent another concussion if he wishes to continue playing hockey.

Albert Lea head hockey coach Roy Nystrom said he emphasizes players learning the right way to hit and how to take a hit.

“We coach our players to keep their sticks down and keep their elbows down,” Nystrom said. “But it’s a contact game, and every once in a while you get in a situation where someone’s hands or sticks are up. Then someone gets hit.”

Until recently, parents and coaches of high school athletes relied solely on the expertise of local hospital staff and athletic trainers to diagnose, then treat concussions. Six years ago, Albert Lea High School athletic trainer Lynn Scheevel requested the purchase of the ImPACT test through the Mayo Clinic Health System in Albert Lea.

The test, which stands for Immediate Post-Concussion Assessment and Cognitive Testing, is a 20-minute computerized system used to evaluate concussions. Scheevel and fellow athletic trainer Afton Wacholz evaluate all contact-sport athletes at the high school every other year. This provides a baseline score of normal cognition for all at-risk athletes. In the event of a concussion, the test compares the baseline score to the post-concussion score for a comprehensive report in deciding when a concussed athlete should be cleared to participate in a sport.

“Both the media and ImPACT make my job easier. Some kids like to lie about their symptoms, lie that they feel fine so they can play again, but test scores don’t lie,” Scheevel said. “It takes all the subjectivity out of it. We don’t have to guess. We know.”

Knowing that Svendsen has sustained numerous concussions, however, does not make his time away from the ice any easier for him or the Albert Lea hockey team, especially with seven varsity players out from injuries already this year. According to a teammate, junior Darik Weigel, Svendsen is one of the few players who can play both offense and defense, an important asset to the team and yet another aspect that factors into Svendsen’s ultimate decision.

“It bugs me. Just watching them condition makes me feel like I’m not part of the team. Makes me feel like I should be out there, doing what they’re doing,” Svendsen said, before remembering his discussion with his mom. “I want to play, but I guess I’d have to understand if I couldn’t. I don’t want to be messed up because of hockey.”