A white Christmas after all 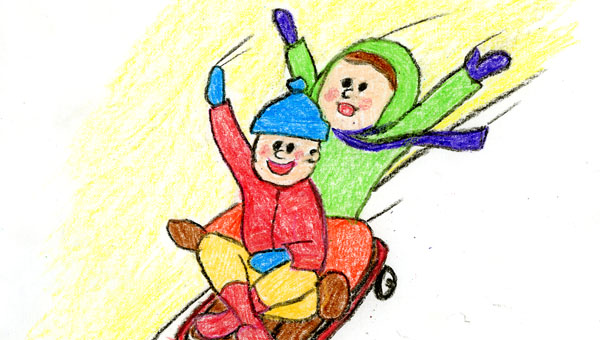 This is a fictional story written by Tribune newsroom staff. Each person took a turn writing a portion of the story. A Tribune staffer also drew the picture above.

Christmas came early for Christopher, who raced up the stairs to his bedroom after receiving a gift from his grandma in the mail.

He opened the door to his room, slid across the wooden floor on his knees and ripped off the wrapping paper before his body could come to a stop.

Under the red and green paper now scattered around his room was a brown box bigger than he was. He slid his hands across the top, gripped its sides and gave it a shake. Just then, his mom popped in the door.

“What is it, Christopher?” she asked with a grin.

He turned his wide eyes back on the gift and popped off the tape.

“A sled!” he shouted as he lifted the box’s lid.

Christopher stood up and was out the door and down the steps before his mom could holler, “Be careful!”

“I will,” he replied as he struggled to lace up his boots. With his sled in one hand, Christopher tightened a hat atop his head with the other and wrapped a scarf around his neck. His coat was in the closet, much too far away, so the boy thought his sweater would keep him warm enough.

He was right. It was a week before Christmas but, to him, it felt like spring.

Overwhelmed with excitement, Christopher slammed his family’s front door and leaped off the front steps onto the sidewalk. His boots splashed in a puddle, and he kicked a piece of ice onto the yard as he began to carry his sled to the park.

Christopher had seen this sled before. It was always in his grandma’s house around Christmas, but he was told never to play with it. It had a wooden top with red steel handles and runners. It also had a rope in front so it could be pulled. While Christopher dreamed of sliding down hills and crashing into snowbanks with it, Grandma was quick to remind him it wasn’t a toy. But now it was his and Christopher couldn’t get to the park faster.

Christopher thought about stopping at his friend Bobby’s house first to ask him to come along but decided he should try that first run down the hill by himself. It would be a special moment, and, besides, if he wanted to go again, he thought, Bobby might want to share.

When Christopher got to the park, he was the only child there. He walked along the top of the hill to find the steepest slope. When he found it, he dropped his sled on the ground, sat on it and dug the heels of his boots into the ground.

“Here we go,” Christopher said to himself as he pulled with his feet and pushed with his hands. His sled slid halfway down the hill before hitting a patch of mud. Christopher was thrown off the sled and tumbled down the hill. As he looked back up, he noticed most of the hill was black and brown and whatever snow was left was melting quickly.

Christopher’s heart sank. There was no snow for sledding, he thought. Would there be snow for Christmas?

Every year since he could remember, he would wake up on Christmas morning and see snow outside his window. Then usually in the afternoon — after the presents were opened and the Christmas meal was eaten — he would go sledding with his cousins.

He wondered if that would happen this year.

With his head hanging low and his sled in tow, he trudged back across the field, through small patches of mud, down the street and up the sidewalk to his house.

He felt a tear trickle down the right side of his face and reached up quickly to wipe it off.

As he walked through the doorway, dropping off his hat and scarf, he caught a glimpse of a photo of himself and his cousin Zach sitting on the mantle.

His mind flashed back to Christmas the year before.

While all of his other cousins were busy playing with their new toys, Christopher and Zach had decided to venture out for a sledding adventure.

Walking down the street, across the field and then up to the steepest slope in the park near his house, he and Zach raced up and down the hill to see who could go the farthest in their sleds.

With more than two feet of snow on the ground, the sledding that day was perfect.

They chased each other, laughed and even had time to sneak in a few surprise snowballs, too. They had the whole park to themselves, and the afternoon couldn’t have been better.

After two hours of fun, the boys ran home energized to tell their mothers of their adventures.

As they walked through the front door, Christopher’s mother snapped a photo of the two boys, who at that time looked like Rudolph the Red-Nosed Reindeer.

They flashed big smiles at the camera with rosy cheeks and noses.

It was the last photo the two boys had taken together before Zach’s accident.

He felt another tear trickle down his face.

He knew he shouldn’t be upset that Zach was permanently hurt by that drunken driver on New Year’s Eve last year, but Zach always seemed so down whenever Christopher wanted to play with him. Christopher didn’t care that Zach was in a wheelchair — there were plenty of fun things they could do together!

Christopher had an idea, but he knew he was going to need help. It looked like they weren’t getting any snow for Christmas, but even if they did Zach wouldn’t be able to go sledding with him anyway. Christopher knew just who could help him.

With just a week left before Christmas, there would be just enough time to plan. He had an idea that would surely cheer Zach up and get everyone in the Christmas spirit despite the weather outside.

Zach would be in the hospital over Christmas getting more physical therapy, and Christopher thought it would be so very special if they were able to go sledding together again.

He thought of the perfect place. Inside the hospital there was a long hallway that, in one spot, was slightly sloped — it wouldn’t be dangerous at all for Zach, but it would still feel like he was going downhill.

But getting permission and decorating the hallway were going to be something else. That week, Mom called the hospital and Zach’s nurses and explained their idea. They wanted to help, too!

Christopher and his mom went hunting at craft stores for anything white and fluffy that could help decorate the hallway. Christopher, his family and some of the hospital staff decorated all day on Christmas Eve to get the place ready for Zach. He decided to visit his cousin so he wouldn’t be lonely but didn’t want to ruin the surprise either.

Christopher could tell Zach wanted anything that wouldn’t remind him he was in the hospital.

“Well what if you could go sledding?” Christopher asked.

“You know I can’t, and besides there’s no snow,” Zach said with a sigh.

“I know, it was just a silly thought,” Christopher said.

The next morning Christopher jumped out of bed and had completely forgotten about Santa and his own presents. He begged to go to the hospital as soon as possible to give Zach his surprise.

Christopher bounded into Zach’s room and said “C’mon! I’ve got a surprise for you!”

He wheeled Zach over to the closed doors that led to the hallway and when he opened them he knew there was no better Christmas present than the gleeful expression on Zach’s face.

Cotton, streamers and sparkles decorated the walls and floor edges of the hallway, with strings of white icicle lights. Rays and a face were drawn on a lamp to look like the sun.

At one end of the hall sat what looks like a sled with wheels. It looked like a sled and everything, but instead of runners, it had wheels.

“It’s an old Flexy-Racer. We found one for sale on the Internet and ordered it just for this occasion.”

The nurses said they had never seen one before and wondered how they came across the idea.

Christopher’s mom said she kept looking for something that looks like a sled with wheels. It turned out that the manufacturer that once made the famous Flexible Flyer sleds also made a roller sled called the Flexy-Racer. However, production stopped in the 1970s. They were a really hot toy in the 1930s.

The nurses wheeled Zach over to the end of the hallway and lifted him onto the roller sled. Christopher sat behind him, holding him up. The boys couldn’t erase their smiles and kept laughing.

Zach’s father grabbed the rope on the front of the sled and pulled them down the hallway. At the slope, they shot downward with extra glee, enough so they nearly clipped the heels of Zach’s dad. He had to step aside and get ahead. Using the rope to keep them straight, he let them coast to a stop.

“Let’s do that again!” Zach exclaimed.

His dad couldn’t be happier, and he pulled the boys back up the slope to the start. Christmas is as merry as you make it to be, he thought.

“Thank you,” he said to Christopher’s mother. “This is the best Christmas gift I have ever had.”

Zach heard his dad and turned to Christopher, “Merry Christmas to you, Chris.”

“No, Zach, merry Christmas to you,” he replied.