From B student to bully target 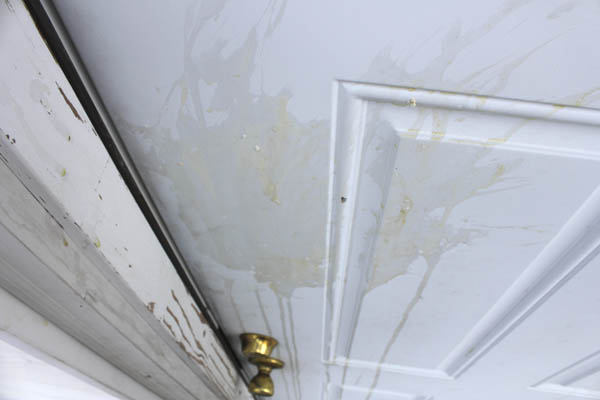 The apartment on Water Street where Anissa Carlson and her daughter and son live was hit with eggs the night before Thanksgiving Day. They entertained family on the holiday despite the mess. -- Tim Engstrom/Albert Lea Tribune

She admits she made mistakes that gave the principals at Albert Lea High School a bad impression of her.

But 14-year-old Jasmine Gonzalez went from being a cheerleader for football and basketball and a B and C student at the middle school in Charles City, Iowa, last year to being an F student and an outcast in Albert Lea this year.

Why? She says she was bullied, primarily by two girls.

In fact, her mother, Anissa Carlson, a certified nursing assistant at Good Samaritan Society of Albert Lea, two weeks ago obtained a restraining order against the two girls her daughter considers bullies.

Even so, the home where Gonzalez and her mother reside was egged the night before Thanksgiving. The two awoke on the holiday to find the eggs on the door, the window and the side of the house.

This was about a week after the girl brought home a report card with F’s in seven classes. Why? Absenteeism. Why was she absent? She said she was avoiding the bullies and some of their friends. 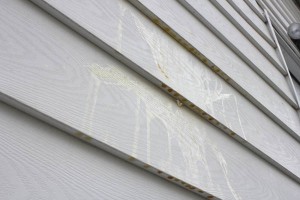 The eggs hit the door, a window and, shown above, the side of the house. -- Tim Engstrom/Albert Lea Tribune

School bully claims can be hard to prove because interchanges happen between two children, often out of sight of other people, and school leaders can’t say publicly what they think happened largely because of data privacy laws.

But some of it is clearly documentable. One bully sent an email one Sunday to an older sister who still lives in Charles City, hinting that she would be waiting for her younger sister that Monday. Gonzalez stayed home.

Plus, students on the bus one Friday witnessed a girl dump crushed chips and water on Gonzalez’ head right before getting off the bus.

Gonzalez and her mother sought a restraining order. The teenager was willing to describe being bullied in legal statements before a judge. That might tell only one side of a story, but experts warn that bullying is defined more by how the target feels, not by what adults might witness. Bullying, they say, involves oppression, not always delivered by punches or kicks but often through intimidation.

The National Education Association estimates that 160,000 children miss school every day for fear of bullies.

To be sure, restraining orders, when requested, pretty much are automatically issued. Judge Steven Schwab ordered the bullies to have no contact with Gonzalez for two years and to stay away from their home on Water Street.

Still, Carlson had never sought a restraining order before in her life. She said she spoke with Ted Herman, the Albert Lea police officer who also works in the high school.

“He told me this year is one of the worst group of kids he has ever seen.”

According to the statement Gonzalez gave to the Freeborn County District Court and to an account she gave the Tribune, one of the two bullies came up to her on Nov. 9 at Albert Lea High School and started pushing her, saying Gonzalez was “talking s— about her.” The bully reportedly then began punching Gonzalez.

Not being one to just take the hits, she defended herself and somehow pulled out the bully’s earring. An older student told them to get back to class.

Gonzalez hollered back to the bully, “I wasn’t talking s— about you.” A teacher witnessed that — but not the rest — and sent the Gonzalez to the office.

There, she protested that the teacher got the wrong girl. The other girl was called to the office.

Carlson was glad to hear the charges were under way and said she hopes they make the girl realize how wrong her actions were. She said Herman provides her with updates on the case.

Intimidation was present, too, Gonzalez also told the court. Classmates at school would tell her that one of the bullies was going around school saying she wanted “to kick her ass.” In addition, Gonzalez says she suffered vulgar names, the ones said about promiscuous or mean women.

“It’s incredible how mean girls will be to each other over boys,” Carlson said.

Gonzalez said school leaders wouldn’t assist her in fending off the bullies because they already judged the freshman as a troublemaker.

That bad impression came partly because, early on as being a new kid, she was caught in possession of a stolen iPod. She had held onto it for a new friend. She admits she knew it was stolen, and she says she never should have taken possession of it.

She received a three-day out-of-school suspension for possessing the stolen music player.

She said this semester she was going through that awkward phase of making new friends in a bigger place where many students already had their circle of friends set. And Albert Lea had no cheerleader program to join, like in Charles City. She made friends with kids who sought her friendship.

The other bad impression she made was her reactions to authority. What to her was expressing a defense for her behavior to administrators, she said, probably seemed like defiance. It didn’t help that she rolled her eyes and at times made sounds of frustration, such as, “Aw!” and “Uh!” rather than showing remorse for her behavior.

One time, she and another girl skipped a class. She said she felt intimidated by a friend of one of the two bullies, so she didn’t go.

Her mother was surprised to learn that the other girl received a lunchtime detention, while her daughter was given a three-day in-school suspension.

“But she did tell me that punishment depends on behavior, how they act and how they respond,” Carlson said.

Her daughter later received another three-day out-of-school suspension for leaving a seat she had been assigned to sit on during lunch. That day, the daughter came walking home from school to the surprise of the mom. No one had called Carlson to say her daughter was kicked out of school.

Herman, the Albert Lea Police Department’s school resource officer, said there is no more bullying than in the past, but young people seem to be more disrespectful of teachers, principals and other adults than ever.

“It’s just the attitude of young kids they get from the parents is: Give me what I want and give it to me now,” he said.

Herman said the high school is addressing bullying but it is not in the school’s power to make it go away. He said blame for bullies falls on the families that raise them.

“The school and the police get blamed for everything. They are only part of the spoke in the wheel.”

Ultimately, families need to raise their children to show respect for other people and their feelings, he said.

Albert Lea High School Principal Al Root said he cannot speak to the student’s situation, but he said the school is taking measures.

“Our role and purpose is to have a safe environment,” he said.

Root said the school employs progressive discipline, based on the severity of the matter and on prior violations. A student who never had been in trouble before would get a lesser punishment than one who had.

He said students receiving discipline meet with counselors, in addition to meeting with assistant principals.

Gonzalez was quick to praise her counselor.

“She was the only one who believed me,” she said.

The 60 to 70 staff members at Albert Lea High School meet with Root regularly to discuss supervision of students and the times and places when students are alone. He said the school has lunch monitors, a parking lot supervisor and monitors at each door, and it makes students aware that they can approach a teacher anytime they are being bullied or picked on.

Root said the school plans to bring in a speaker to talk about building relationships and making transitions to new schools. The school will have activities tied to Martin Luther King Jr. Day on treating others fairly and teaching students how to deal with being bullied.

He said the school is focusing on helping students make transitions and said it presently offers a program called Link Crew to eight-graders and ninth-graders. It describes how to ease into the high school and stay safe, and it took place Aug. 30 and 31, during orientation before classes began Sept. 6.

Gonzalez wasn’t at orientation. She was at a camp at Luther College in Decorah, Iowa, getting a little peek at what college is like.

Right now, the 14-year-old isn’t attending any school at all while she waits to get into a different school.

On Nov. 29, she visited Glenville-Emmons High School with her mother, and she wants to go to school there.

The single mother looks forward to seeing her daughter get back on track at Glenville-Emmons, but she is waiting for approval from Glenville-Emmons and Albert Lea officials.

“I’m new at this. I’ve never had to do this,” Carlson said. “I thought she could start the next day, but apparently it is not that easy.”

She said the alternative school at Brookside Education Center doesn’t seem to be the right track for her daughter. Gonzalez said she wants a normal high school experience. She likes to wear her Charles City clothing. That’s where she was popular.

Carlson said it seems like the anti-bullying measures at Albert Lea High School are aimed at teaching victims how to cope with bullies, rather than removing bullies from the premises.

Carlson grew up in Albert Lea. She left about five years ago and returned in July for the Good Sam job and to be closer to family. She found a place in Albert Lea, and moved in with Gonzalez and a son.

“I came here to better my life, not to make it worse.”

Not only is the girl missing school, Gonzalez pretty much failed a semester of her education due to being absent.

“She has a lot of making up to do and wants to show Glenville that she can,” the mother said.