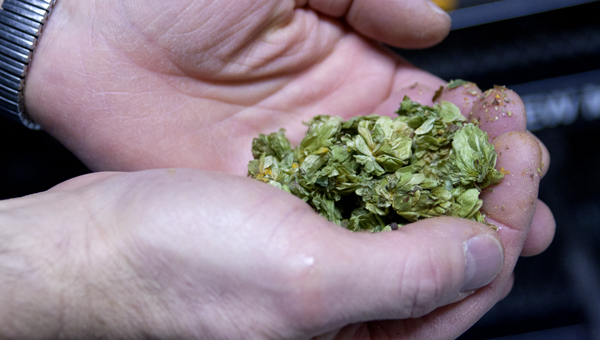 Dried hops are an important ingredient when it comes to brewing beer. They have a bitter taste that balances out the sweet flavor of the wort they are mixed with. -- Brandi Hagen/Albert Lea Tribune

NORTHWOOD — For the last five years, Peter Ausenhus has been brewing beer with a three-vessel system in the back room of what used to be Worth County State Bank. He consistently brews Sunderland English Mild, Dillon Clock Stopper, Brown Ale, Field Trip IPA and Oatmeal Stout. Each month he brews one or two kegs of a specialty beer of his choice.

What ingredients are needed to make beer? 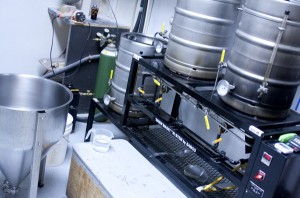 On the right is the three vessels used for brewing. The left cylinder is a 27 gallon fermenter where the beer will age for four days up to several months.f

It only takes four ingredients: water, malted barley, dried hops and yeast. Water is treated based on the kind of beer being brewed. Depending on the levels of minerals in the water, it will cause different reactions and different flavor in the beer. The barley is where the beer gets its color, flavor and also where the alcohol comes from. The hops, which looks like dried-up lettuce, will add flavor, an aroma and a preservative quality. Ausenhus has three different yeasts that he uses depending on what he is brewing. Yeast is temperature sensitive and each kind reacts differently also causing different tastes.

Where does the grain come from?

The malted barley Ausenhus uses for his beer comes from the United States, Germany, Scotland and Belgium. Since he obviously can’t travel to those places every week, Ausenhus has a trusted supplier in Minneapolis that allows him to pick out what he wants and within a day, a truck will show up with his grain.

How does the brewing process begin?

When starting a new batch of beer, Ausenhus first filters the water he will use through a process called reverse osmosis. He said Northwood has very hard water.

This is where the malted barley comes in. By itself, it tastes like Grape-Nuts. When it is mashed, a process where it is mixed with the filtered water and heat, it becomes a sweet liquid called wort. This process takes about an hour.

When the wort is ready, it goes through a 40-minute process of being strained into a boiling kettle. This is called lautering. Filtered water will be used again as a rinse to make sure all of the sugars are included in the wort.

Once the wort is boiling, Ausenhus adds the hops. Like many recipes, the hops is added in stages, not all at once. 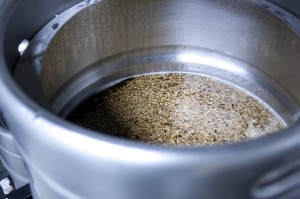 It takes 50 pounds of malted barley to make one 10 gallon batch of beer. Here, it is in the mash stage of the brewing process. After the wort is drained into the boiling kettle, the grains are cleaned out and fed to pigs or made into dog biscuits. Brandi Hagen/Albert Lea Tribune

When the wort is done boiling, Ausenhus really has to pay attention to what he is doing. He has to make sure all the supplies he will use to transfer the wort to the fermenter are sanitized. He has to move quickly because the wort needs to be chilled and once cooled it is becomes vulnerable to infection. Once the wort is in the fermenters, the only thing left to do is add the yeast and wait.

How much do you make?

Each batch makes 10 gallons of beer. He can fit two batches at a time in the fermenters. Once the beer is done fermenting, it gets moved into five-gallon kegs and can be consumed. Because some of the brews take several months to ferment, Ausenhus has about five weeks worth of supply ready at all times.

How much time do you spend on the brewing process?

Ausenhus works about 60 hours a week. He brews every Monday, Tuesday and Thursday. Sundays are spent cleaning kegs and putting beer into them. The actual brewing process takes about seven hours. Most of the beer he makes can be consumed within a month to five weeks from the day it is brewed. Others take several months.

Is the beer bottled?

Ausenhus only puts his beer into kegs. Bottling is a very expensive process and as small as his brewery is, it’s not worth it for Ausenhus to do so.

What goes to waste?

Not much. Ausenhus said he tries to be as green with his brewing process as possible. The grain that gets scooped out of the vessel after mashing is fed to Ausenhus’ neighbor’s hogs, thrown in his own yard for the chickens or made into dog treats. The water is recovered and reused for cleaning or sent to the basement to the washing machine. The hops are like sludge after the process, so that sludge just gets thrown away. 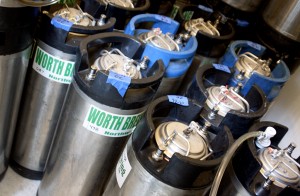 These five gallon kegs are where the beer is transferred after it is done fermenting. The beer at Worth County Brewery is unfiltered and unpasterized because it offers a fresher and more flavorful taste. Brandi Hagen/Albert Lea Tribune

Changes over the last five years?

Ausenhus said when he started in Northwood, he was about the 10th brewery in Iowa. Now, there are about 27. In the United States, there are 1,700 compared to the 50 that were around 30 years ago.

“It’s kind of going back to the 19th century where every small town has its own brewery.”

Was he always going to do this?

No, Ausenhus was a journalist who had an interest in the process and history of making beer. After working for a brewing company in the Twin Cities, he moved to Northwood where he had spent time as a child.

Brewing “just became a passion, a fun hobby to do at home,” he said.

In 2007, he and his wife, Margaret, decided to pursue Ausenhus’ passion and started Worth Brewing Co.