An Albert Lea grandmother wrote her first children’s book and was able to get it published.

“Around a Woodsy Corner” is a book about grandparents touring the North Woods of Minnesota on all-terrain vehicles with grandchildren and spotting wildlife. They find animals ranging from loons to lynx. 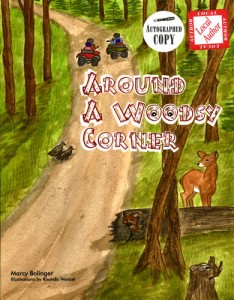 “Around a Woodsy Corner” by Marcy Bolinger

The author, Marcy Bolinger, lives at 1406 Lee Ave. in Albert Lea. Her sister-in-law, Rhonda Weitzel of Rochester, illustrated the book.

Bolinger said she worked on the book and shopped it around for three years. Finally, a small publisher in Grand Marais, Gunflint Trail Productions, agreed to print it. Bolinger sent owner Nace Hagemann an email message. He asked for a manuscript. She complied.

“He said it was wonderful and helped me out,” she said.

The Bolinger family owns a cabin in the woods on Tom Lake, about 33 miles by road from Grand Marais. Bolinger and her husband, Charles, spend summers at the cabin. They have lived in Albert Lea for 37 years. Both are retired and enjoy their four grandkids. She is a former employee of the Albert Lea Community Child Care Center, not The Children’s Center.

“I love it up north and my grandkids enjoy it and now everybody else,” she said.

Bolinger, who said she is in her 50s, will be at Book World at Northbridge Mall from noon to 3 p.m. Dec. 17 for a book signing.

“This will be my first one, and I won’t know what to expect,” she said. “I’ll be shocked.”

The children’s book is unavailable at local stores, but Bolinger is hoping to change that. For now, it is for sale directly from her or from the websites for Amazon and Barnes & Noble.