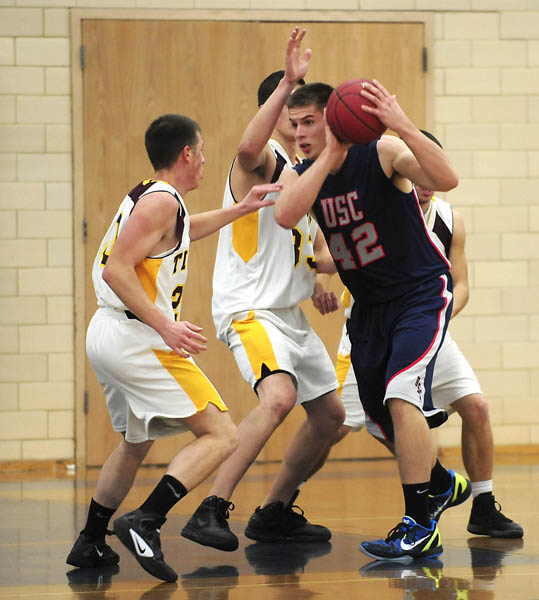 WELLS — United South Central’s Kyle Bauman grabbed a rebound and dunked it into the basket for the second score of the game on Tuesday night during the boys’ basketball team’s game against Stewartville.

“I see him dunk all the time so I think our guys have become accustomed to that,” said USC coach Rob Stevermer. “But sure it’s a nice luxury to have a guy that can go finish.” 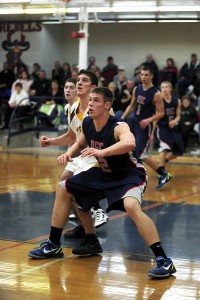 USC was able to triple their score to 24, while Stewartville only scored 11 more points before Bauman wrapped up the first half by hanging from the basket after a dunk with less than 10 seconds on the clock.

“He’s a big kid and if you can get him to play big that makes it even better,” said Stevermer.

The senior scored 13 points in the first half, followed by Steve Voigt with six, Cole Stencel three and Chris Melby two.

Bauman made eight points for USC as the second half got started. Stewartville just couldn’t get the baskets they needed to catch up. The Rebels built a 27-point lead midway through the second half.

“We were able to get some guys in the game and keep us fresh,” Stevermer said. “I think our defensive pressure, especially in the beginning of the second half, took a toll on them.”

When a timeout was called, the already noisy student section took advantage of the opportunity and burst into singing happy birthday to Stencel.

After play resumed, and with help from his teammates, Voigt was able to score the last six points of the game.

“It feels pretty good,” said Voigt, who finished with 14 points. “It’s my second varsity game and I like to get in there and do what I can.”

“He comes in, especially that first half, and gives us a presence,” said Stevermer. “I don’t think any of our other guys really have the sense that he has on the court. He sees things really well, has good hands, good feet. It’s a nice complement to the height with Kyle and Jason to have him come in and be a guy that can play off those guys.”

Other scorers for USC in the second half were Bauman, 15, Stencel with three and Trey Allis two.

Even though it was a win for USC, Stevermer and Bauman couldn’t help but think about what comes next.

“Our defense got up into the guys and made them work, but I still think we need to get back into practice this week and work for our game in New Richland on Friday,” said Bauman.