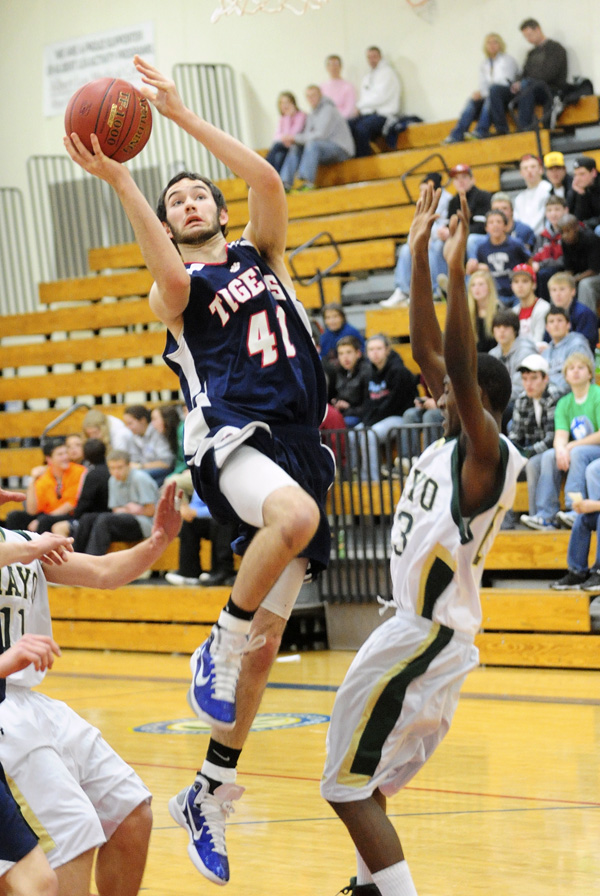 Albert Lea’s Kyle Ooms scores a layup on Tuesday during the first half of an 84-81 loss to Rochester Mayo. -- Andrew Dyrdal

After being outscored by an average of 36.5 points over its past two games, the Albert Lea boys’ basketball team needed  a team effort to bounce back on Tuesday against Rochester Mayo.

The Tigers got it but couldn’t hold on and missed three of its final four free throws in a back-and-forth game, losing in overtime for the second straight time at home, 84-81. 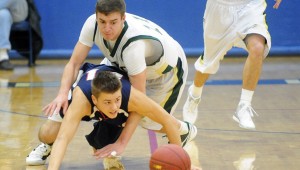 Albert Lea’s Tyler Wichmann dives for the ball on Tuesday during the first half of an 84-81 loss to Rochester Mayo. -- Andrew Dyrdal

“We had our opportunities,” said Tigers coach Lucas Kruescher, who’s team shot 6-of-12 from the free throw line. “We had the looks that we wanted but we’ve got to make free throws. That’s two overtime games in a row now where it’s what could have been.”

Kyle Ooms led Albert Lea with 31 points and helped the Tigers keep pace with the hot-shooting Spartans and come away with a 37-35 halftime lead.

The Tigers, who struggled against full-court pressure in its last two losses to Austin and Owatonna, torched Mayo’s press to build a 29-25 lead and force the Spartans to drop back into a half-court defense.

“We got them to pull off,” Kruescher said. “I thought we had a really good practice yesterday and we talked about Austin and Owatonna. They’re going to make us better, and those are games we want to learn from because they’re going to exploit your weaknesses. We were really focused yesterday in practice on getting better and taking away from those previous two games. We did, we handled their press much better. We got layups and forced them to take it off.”

The two teams traded leads in the second half, and the Tigers built a 70-64 advantage off an Ooms steal and fastbreak dunk with two minutes and 45 seconds left in the game. Albert Lea had two costly turnovers in the final two minutes, though, and missed the front ends of two 1-and-1 free throw opportunities, including one with a two-point lead and 30.8 seconds remaining and another while tied and 10.7 seconds left.

The Spartans closed regulation and began overtime with eight unanswered points and held the Tigers scoreless for 5:10 during that stretch. A 3-pointer from Tyler Wichmann cut the Spartans’ overtime lead to 74-73 with 2:35 remaining but Mayo went on an 8-3 run to extend its lead to 82-76 with 26 seconds left. Albert Lea’s Evan Templeman made a 3-pointer at the buzzer to make it an 84-81 final.

“We keep taking steps forward,” Kruescher said. “This isn’t the same as a win, but we’re improving each week. We’ve got to stay positive and keep coming to work because we’ve got a tournament plus 20 games left. I’m confident in our guys.”

Tuesday’s loss was the Tigers second in overtime when it held a lead late in regulation. Albert Lea also lost in overtime in its season opener 85-80 to Red Wing. Ooms said the team needs to work on ball control and defense down the stretch.

“You’ve got to get stops and prevent turnovers on offense,” Ooms said. “We’re going to be working hard to get that fixed up and hopefully next time when we’re in that situation we’ll get it through.”