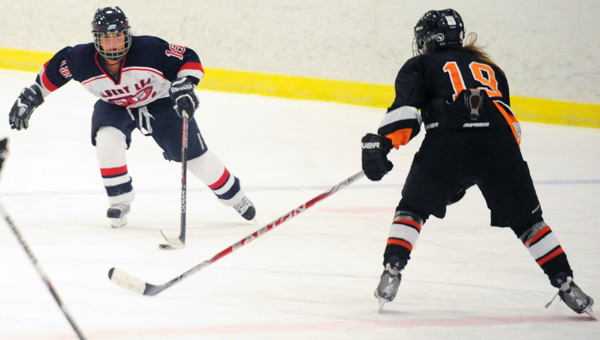 The Albert Lea girls’ hockey team came close to snapping its seven-game losing streak on Tuesday but couldn’t rally from a two-goal deficit in a 4-3 loss to Winona at Roy Nystrom Arena.

The Tigers led 2-1 at first intermission, but fell behind 4-2 after the Winhawks scored three goals in the second period. Mariah Leach scored to pull the Tigers within one in the third, and Albert Lea had a six-on-four advantage in the final 27.9 seconds but its only shot missed wide.

Winona cleared the puck with under 10 seconds remaining to secure the win.

“I thought we played our most complete game of the season tonight,” said Tigers coach Paul Willett. “We haven’t been getting consistent effort and tonight, for the most part, we got good, solid, consistent effort from our kids”

Winona scored first in the game, which had only five penalties, on a goal from Shelby Theis at 10:44. Albert Lea sophomore Anna Anderson responded with two goals over the next two minutes to give the Tigers its only lead of the game, 2-1.

The second period doomed the Tigers, though, as the team was outshot 14-12 and gave up two of Winona‚Äôs three goals on its penalty kill.

“We just had a couple of little breakdowns on the penalty kill and pucks ended up in the back of our net,” Willett said. “That‚Äôs something we’re continuing to work on. Our penalty kill hasn’t been bad this year but there’s certainly room for improvement.”

The Tigers didn’t score on either of its power plays, including on a two-man advantage in the closing seconds after it pulled its goalie, Katie Schwarz.

Albert Lea’s lone goal in the third came from Leach at 5:18 of an assist from Natasha Moyer.

“We need to start capitalizing when we have a man advantage,” Willett said. “Our power play has really been struggling this year.”

Willett said the Tigers need to keep working on strengthening its offense.

“We need to protect our goalie but we need to improve in the offensive end, and that’s our biggest thing right now,” he said. “We need to get more pucks to the net and crash a little harder for rebounds. We’re slowly getting there.