United Way weathers the tempest of 2011

I am sure many of you are with family right now, sitting down on cozy chairs after a traditional breakfast to read through the news of the day. I am looking forward to my mom’s famous Swedish rice and fruit soup (if you have not had true Scandinavian fruit soup, you are missing out!).

It’s amazing that 2011 is almost over — and what a year it has been! Though it didn’t have the uncertainty of the past three years, 2011 was still a year of great change. It has been challenging, wonderful and painful at times, but we have gotten through it and, as a community, I feel we are all the better!

I have personally seen much change in the lives of friends and family. This has been the year for marriages and births, for new jobs or completely changing the course of one’s life. It seems this has been the year we are beginning to re-define ourselves and look to the future.

This is certainly an exciting time! And it is a time to come together to recognize the best in our community and the best in all of us.

United Way has started on the same path. We are looking to the future and the role we will play in shaping what our community will become. Our board has had to make some difficult choices this year; there is no way we can stop the waves of change from hitting our community, but we can join with others to build a raft and guide that raft to shore. 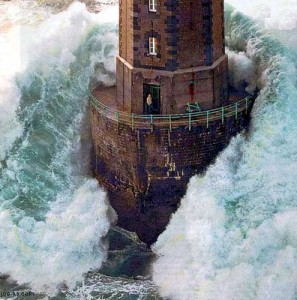 Famous 1989 photo by Jean Guichard taken off the coast of the Brittany region of France. Guichard is known for his lighthouse photography. Visit his site at www.jean-guichard.com.

There are many analogies to ships and storms and how we weather through those times to emerge stronger.

One of my favorite stories, and a story I used to tell during my days as a preschool teacher, was of La Jument. La Jument is the name of a lighthouse that became well-known during a tempest in 1989. There were two lighthouse keepers who were waiting for rescue from a helicopter. A photographer named Jean Guichard happened to be in a helicopter taking photos of the storm.

As the storm was picking up and growing quite strong with waves that reached almost to the top of the building that is about 150 feet tall, one of the men heard Jean’s helicopter. He opened the door to look and was almost engulfed by a large wave. Jean was almost certain the man had been swept to sea, but he was able to shut the door in time.

Jean had taken several photos of the man, the one that has now become famous is when the waves were engulfing the lighthouse and were just about to reach him.

The one message that always comes to mind when I think of this story is: Faith is the substance of things hoped for and the evidence of things not seen.

This next year, we can practice having faith, hoping for the best for our community. When we set positive intentions for our lives, they have a tendency to come true. Let us fill the news with good things in 2012 — and remember; one of the greatest gifts we’ve been given is each other.

Ann Austin is the executive director of the United Way of Freeborn County.