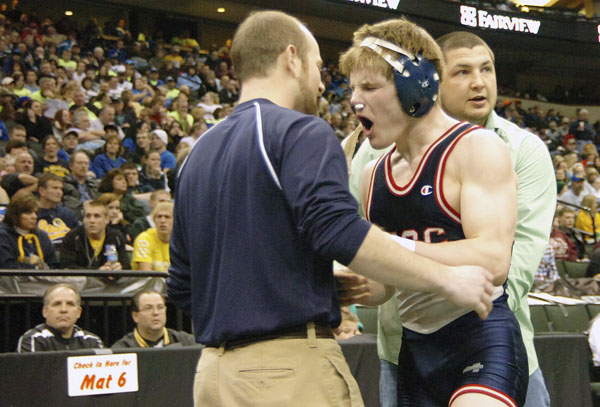 United South Central senior Dustin Dylla was a long shot in March at the wrestling Class A State Tournament at the Xcel Energy Center in St. Paul.

But he proved, according to his coach Marcus Eytcheson, with the right attitude anything can happen.

The sixth-ranked, 140-pound Dylla won three matches en route to a finals matchup against Pierz’s Clint Postner, the undefeated and No. 1-ranked wrestler in the state. Dylla kept it close during the first two periods and trailed 3-2 entering the third. Poster scored a three-point near fall, takedown and penalty point in the final two minutes to win 9-3.

“He’s not a naturally gifted wrestler but he’s always working hard,” Eytcheson said, of Dylla, following the match. “If you’re willing to listen and learn you can get to a state final. He proved it.”

Dylla, who currently wrestles for South Dakota State University in Brookings, said his goal was to get the state finals and he had no regrets.