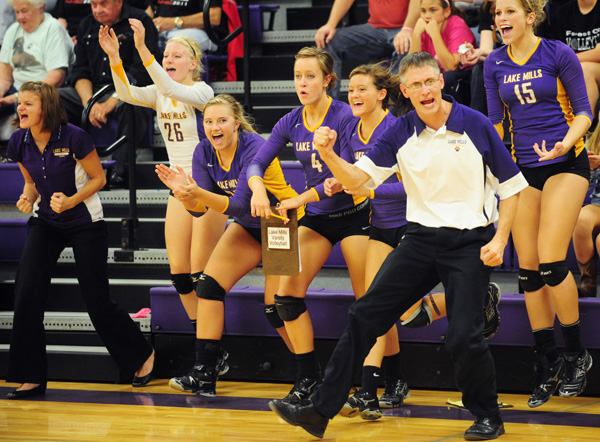 The Lake Mills Bulldogs were volleyball’s Cinderella story in 2010.

After slowly climbing Iowa’s Class 2A rankings, the Bulldogs peaked at No. 6 heading into the program’s first state tournament berth in six years. Unknown and considered untested by many, Lake Mills swept its way to the state finals before losing to Western Christian in the championship.

Despite losing four starters off the state runner-up team, the Bulldogs entered 2011 ranked No. 2 and didn’t disappoint. Lake Mills won 64 consecutive sets to start the season and ran its record to 45-0 before falling to eventual state champion Dike-New Hartford in the Class 2A semifinals. The Bulldogs also won its ninth straight North Iowa Conference title.

“It was just an amazing run to go 45 straight matches without a loss and to set the record we had,” said Bulldogs coach Jim Boehmer after being named the Tribune’s All-Area Coach of the Year. “As a coach I get to work with a great bunch of kids, but my job is to bring them together on the floor, and that is always the best part each year.”

The No.2-seeded Bulldogs opened the Class 2A Tournament with a sweep of St. Albert, Council Bluffs, before falling to third-ranked Dike-New Hartford in the finals.

Following the season-ending loss, Boehmer said of the team’s seniors: “They set high standards for themselves and I can’t argue with that. I told the girls in the locker room they are heroes to a lot of people. All they do is walk out here and there will be little girls looking up to them. I said that’s the most important thing what type of people you’re going to be. That’s what we pride ourselves on.”