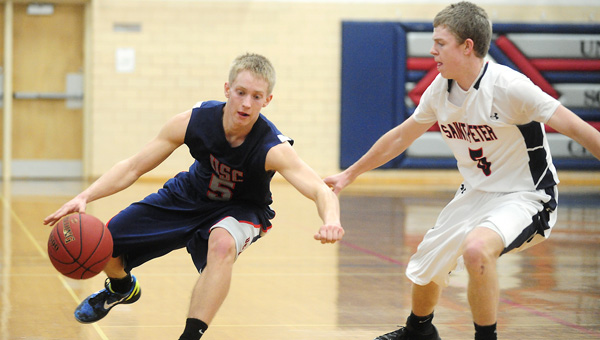 United South Central’s Kyle Bauman was one of the top three scorers during a loss to St. Peter on Monday, 72-56. Bauman scored 22 points for the Rebels. St. Peter’s Joey Bartlett and Ben Rosburg each scored 23 points.

The first seven minutes was a close game between the teams. Bauman scored right away with 17 minutes and 32 seconds left on the clock.

Over the next seven minutes, Jason Huper, Trey Allis, Cole Stencel and Bauman each scored a 3-pointer. The Rebels led 16-12. 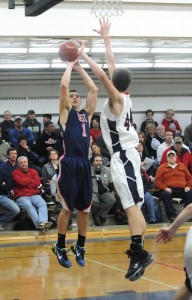 Brandi Hagen/Albert Lea Tribune Jason Huper takes a shot during the second half of United South Central's game against St. Peter on Monday. Huper scored 11 points for the Rebels.

But by the time there was less than 7 1/2 minutes left of the first period, the Saints had stolen the lead 23-20 after a nine-point run.

“You know a team like St. Peter can score and they score in bunches,” Rebels coach Rob Stevermer said. “We probably aren’t as explosive offensively. We kind of rely on keeping teams down. They got a little run on us there, but I was proud of the way our guys battled back and kept ourselves in the game.”

“Going into halftime down 10, we felt like we were still in it,” Stevermer said. “We just needed to get some shots to go for us early in the second half.”

Bartlett scored within 10 seconds of the second period. Bauman scored 20 seconds later and was able to put four more points up for the Rebels. After three minutes, St. Peter led 39-31.

USC started to trail by 14 points, but dropped it back to a 10-point span at the 12-minute mark.

The Saints’ versatility to play inside and out was having an impact on the Rebels as they slipped toward a 16-point loss.

“The big thing they do really well is pass the ball,” Stevermer said. “ They find open guys and have a lot of guys that are versitile. When a team can be so versitile, it is kind of tough to focus on one area.”

The Rebels expected Bartlett to score a lot of points for the Saints, but Stevermer said they weren’t expecting Rosburg to.

“It was a learning curve at times, but overall I think compared to where we were a month ago, even a couple weeks ago, we’ve improved,” Stevermer said. “I’m pleased with how we played. We ran into a team that played better than we did, but i thought we played one of our better games of the year to be honest.”