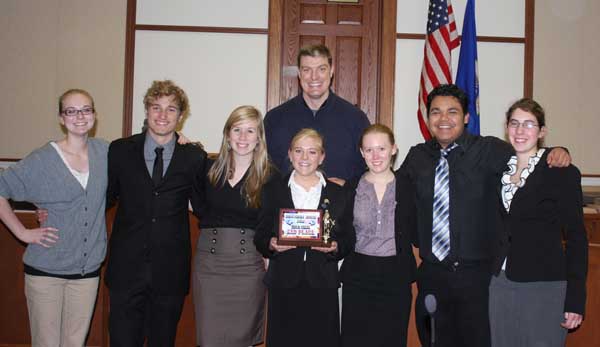 One of the mock trial teams poses with coach Neil Chalmers. 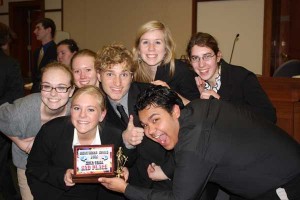 The mock trial team celebrates with their trophy.

Both Albert Lea 1 and Albert Lea 2 represented the plaintiff in round one and represented the defense in Round 2. Albert Lea 2 consisted of many students performing their for the first time ever. Coach Neil Chalmers said “The No. 1 goal for today was to simply get up and perform. We had a lot of kids who needed to see how mock trial works.” While Albert Lea 2 lost both trials, Chalmers remained upbeat.

“This was a great learning day, and I am really proud of our kids” Chalmers said.

Albert Lea 1 was made up of mainly of experienced mock trial team members. Team 1 won both of their trials. This qualified Albert Lea to participate in the tournament championship against Apple Valley High School. While Albert Lea lost to finish in 2nd place, Chalmers was very encouraged.

“We put on a great trial, especially for this early in the season,” Chalmers said.

Albert Lea hosted a scrimmage with Maple River on Jan. 10 and traveled to the Lakeville North Invitational on Jan. 14 before starting the regional competition on Jan. 19.