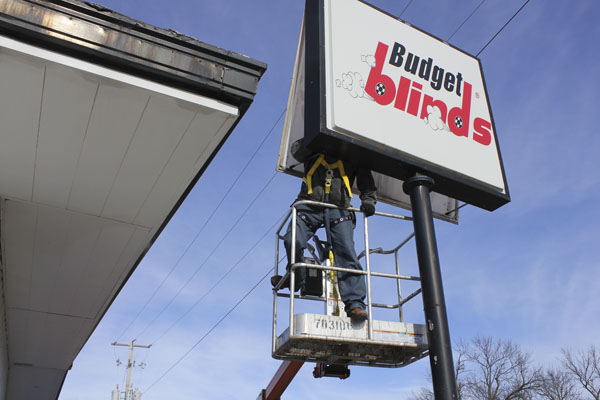 Troy Thompson of Thompson Electric changes the bulbs and ballast in the Budget Blinds sign on First Avenue. He said he was glad to be working outdoors on such a nice day. -- Tim Engstrom/Albert Lea Tribune

Albert Lea set a record Thursday for air temperature, breaking one set in 1930. 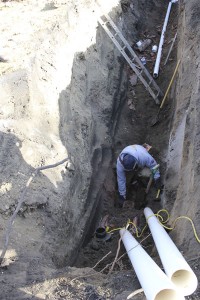 Kris Aanes digs around a clay pipe at about 1 p.m. Wednesday shortly before installing PVC pipes. The warm weather made the dig at 1213 Fountain St. go a lot faster, done in one day.

So erase 46 degrees for Jan. 5 in the record books and scrawl 52. Will it be another 82 years before that one is broken?

It was too nice out Thursday to answer trivial questions like that. Many people in Albert Lea and across the region simply were outside enjoying the sunny weather Thursday, such as Penny Harmdierks. She was running around Fountain Lake on the Blue Zones Walkway.

“It’s a blessing to have this year. Last year seems like a long winter,” she said.

And even if Old Man Winter comes around, this will end up being a short, easy-to-get-through winter, she said.

Dave Claussen of Claussen Excavating dug a trench with his backhoe Thursday in the yard of 1213 Fountain St. so Kris Aanes of Jim & Dude’s Plumbing, Heating & Cooling could replace the sewer line.

Claussen said normally in January the ground is frozen for a foot or two. He said the frost was only 2 or 3 inches deep. That made digging a lot easier and quicker. He said he brought a frost hook for the backhoe but found he didn’t need it. 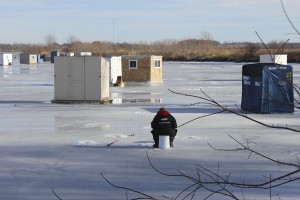 Fish houses populate Albert Lea Lake near Frank Hall Park on 6 inches of ice, though not nearly as many as there were in a normal year.

Aanes said his manager at Jim & Dude’s declared that Thursday was the day to get this big job done. And Aanes said he is fortunate to have nice weather because the work had to be done. The old line had plugged five or six times recently.

Troy Thompson of Thompson Electric on Thursday was replacing the bulbs and ballast in the backlit Budget Blinds sign on First Avenue.

“We probably would send someone to work on a sign in subzero weather,” he said.

He said he likes the warmth for work but wishes there was more snow on the ground for play. He likes to ride snowmobiles.

“This time of year there should be snow on the ground,” Thompson said.

There were some fishhouses on the ice of local lakes, but not nearly as many as normally are in January. One fisherwoman on Albert Lea Lake near Frank Hall Park said the ice was about 6 inches deep. 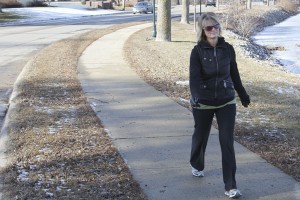 Penny Harmdierks walks on the Blue Zones Walkway along the south shore of Fountain Lake on Thursday. She said does quite a bit of walking and running and likes the warm weather.