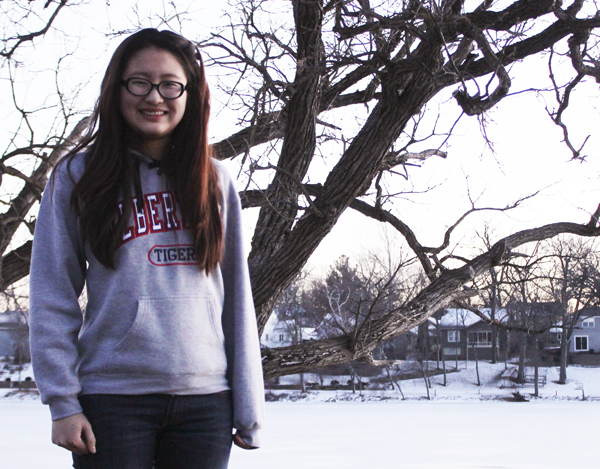 Julie Xia, 17, poses for a photo near Fountain Lake. Xia is an exchange student from Belgium who will be in the United States until mid-July. -- Kelli Lageson/Albert Lea Tribune

Julie Xia, 17, has been staying busy taking classes at ALHS and seeing the sights in Minnesota and around Albert Lea. She’s from a town in Belgium called Liege, which is the third most populated city in the small European country. Xia compared Liege’s size to that of Rochester.

“I like this small town,” Xia said. “People here know each other.”

Xia said she doesn’t know many of her neighbors in Liege. She’s staying with the Thomas family, which is one of three families she’ll stay with in her year in Albert Lea. She stayed with the Benda family for a few months and will stay with the Sandagar family toward the end of her stay.

Xia is an exchange student through Rotary Club and said she really hoped to come to the United States. She had to list three places she’d like to go and the other places she said she’d go to were Australia and England. She wasn’t able to choose which state in the U.S., and she said she had to look up where Minnesota was when she found out where she was going.

She said so far the weather is similar to Belgium’s even though it rains more there, and one of the big differences is the food. Xia said it’s not common to drink milk with each meal, and it’s usually only drunk at breakfast. Johanna Thomas, who’s hosting Xia, said she was hoping Xia would cook some traditional Chinese food for her, but Xia said she doesn’t cook. Her parents own and operate a Chinese restaurant in Liege.

Xia already graduated high school in Liege and decided to do the exchange program for the travel and experience. She’s still at ALHS full time and is enjoying how different it is from school in Belgium.

“There you can’t talk to teachers about anything personal,” Xia said.

She said it’s just accepted that students and teachers are separate and that it would be out of the ordinary to ask your teacher how their Christmas was. She likes taking all the elective classes like photography and gym classes, though she does also have to take the core classes in math, science and history.

After she returns home in mid-July she hopes to go to college in Liege at the University of Liege. She wants to study trade and business and hopefully own her own company some day.

For now she’s enjoying the sights in Minnesota, including seeing the Mall of America in Bloomington. She liked being able to shop at Hollister, American Eagle and Abercrombie & Fitch. She also said she can’t believe how cheap Levi jeans are, and that they’re very popular and expensive in Belgium.

Xia is also participating in the mock trial program and will be a witness on one of the teams. She was the manager for the girls’ soccer program in the fall and said everyone in extra-curricular activities and at school have been welcoming.

Thomas said though they’ve only had Xia staying with them for a little while that she fits right in with the family. Thomas is glad she’s not a picky eater and that she gets along with her children, Kelsey, E.J. and Andy.

“She’s really a part of our family,” Thomas said.

Xia talks with her family via Skype and calling. She has her own iPad, which helps her keep in touch. She said she plans to come back again sometime in the future to visit the friends she’s made.