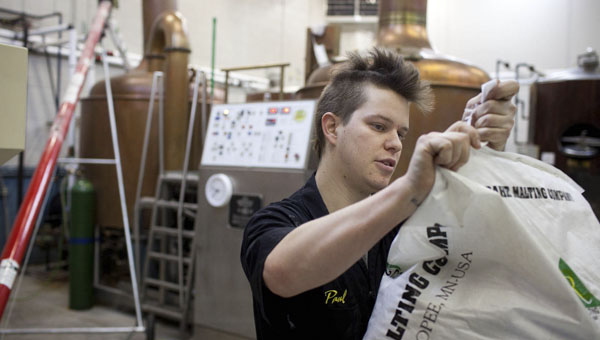 Paul Johnston, head brewer at Harriet Brewing, opens a bag of malted barley as he starts to make a Belgian-style ale on Jan. 24 at the Minneapolis microbrewery. -- Jennifer Simonson/MPR News

MINNEAPOLIS — When Paul Johnston flips a switch at Harriet Brewing Co., 600 pounds of malted barley make their way through a grinder, up a tube and into a 15-foot-tall copper-plated vessel. In about a week and a half, the barley will be beer.

Harriet Brewing will be brewing a lot more beer after the Minneapolis City Council approves its application to operate the city’s first brewery taproom today. It probably won’t be the city’s last.

Small beer-making operations have been popping up all over the city — and around the state. At least 10 new breweries opened in Minnesota last year, from Castle Danger Brewing on the North Shore to Olvalde Farmhouse Ales near Winona.