The Freeborn County Historical Museum is one of a few museums in the state that will get to house the traveling “Electrifying Minnesota” exhibit. The exhibit was created by The Bakken Museum, in partnership with the Minnesota History Center Traveling Exhibits Program. 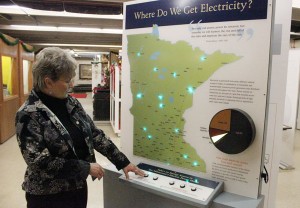 Pat Mulso, executive director of the Freeborn County Historical Museum, shows one of the interactive parts of the traveling exhibit about electricity in Minnesota. -- Kelli Lageson/Albert Lea Tribune

The exhibit shows the ways electricity has transformed the lives of Minnesota residents in the past 100 years or so. It has many features including informational panels, short videos and hands-on pieces that will interest all ages.

Pat Mulso, the museum’s executive director, said the museum received a grant that helped her apply for the exhibit. The exhibit itself is also the product of a grant — The Arts and Cultural Heritage Fund, part of the Clean Water, Land and Legacy Amendment created by Minnesota voters in 2008. The exhibit will only be in Freeborn County from Dec. 22, 2011, to Feb. 12. It will next travel to Clearwater, Dakota and Steele counties.

“The neat part is that all parts of the state can view it without traveling,” Mulso said.

She said there have been just a few traveling exhibits in the past, and she hopes there are more available in the future. Most of the exhibit is in the museum’s lower level. 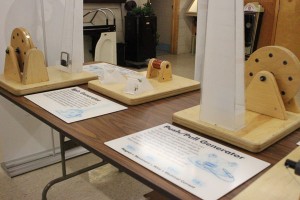 “I think people will enjoy reading about electricity,” Mulso said. “The kids will like the hands-on part — a lot of people like to touch and feel and see how things work.”

Mulso said parts of the exhibit will remind people of their past. She was reminded of her childhood in Dayton, Ohio, after seeing electric street cars on one of the informational panels. Mulso hopes to bring classrooms of children and scouting troops to see the exhibit. It’s also open during the museum’s hours from 10 a.m. to 4 p.m. Tuesday through Friday. Mulso said she plans to have a special Sunday viewing before the exhibit closes. 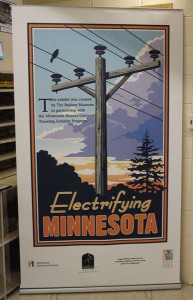 A large panel shows the name of the “Electrifying Minnesota” exhibit at the Freeborn County Historical Museum. 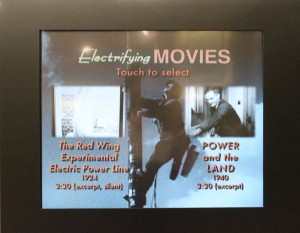