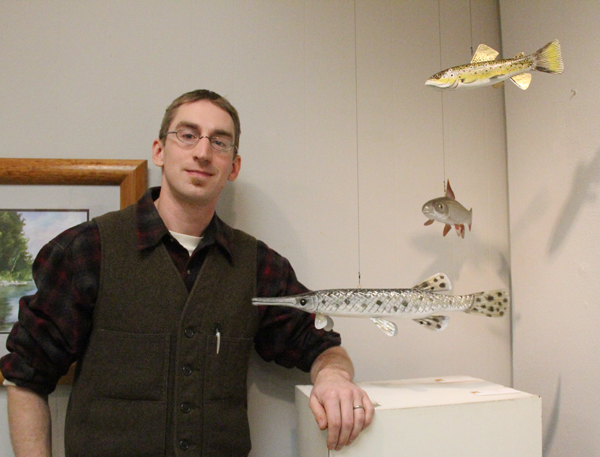 Tim Zenk poses near his fish decoys he created. He entered them in to the Albert Lea Art Center’s All Member Show. -- Kelli Lageson/Albert Lea Tribune

An artist with an unusual medium is one of many featured at the Albert Lea Art Center’s annual All Member Show.

Tim Zenk recently became a member of the art center after having grown up in the area and moving back in the last year. He wanted the opportunity to show his artwork, and since the All Member Show is only for members he got his chance. 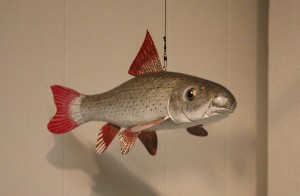 Tim Zenk created this fish decoy to look like a red horse, a fish that would attract a northern.

Zenk creates fish decoys that he fashions and whittles out of small pieces of bass wood. He’s been doing it for about two years.

Zenk, who said he’s been fishing since he was four or five, first made the decoys look pretty basic. He now likes to spend anywhere from four to 20 hours on a decoy to make it look much like the actual fish it resembles.

“The fins are hammered sheet metal, and they’re weighted with lead,” Zenk said.

He uses oil-based enamel paints, and upholstery tacks are attached to make eyes. He makes some small frogs, but mostly makes fish that would attract northerns like long-nosed gars, brown trout and red horses.

“The gar is just a fun-looking fish,” Zenk said.

He has about a dozen or so in progress, as he makes them for himself and for others. He’s been asked to make them as gifts before, but he also likes experimenting for himself. He’s hoping to make some croppie, bluegill and walleye decoys in the future. He has decoys that he actually uses to fish, but they’re much simpler in design than the ones in the art show.

“It’s too much work to let fish gnaw on them,” Zenk said.

As he progresses with his work he’s enjoying learning about the anatomy of different fish and how he can make them look accurate with paints and shapes.

People can see Zenk’s work and all different kinds of art work in the All Member Show that runs through Feb. 18. An open house was held Jan. 15. The art center’s gallery is open to the public from 10 a.m. to 2 p.m. Tuesday through Saturday.

The show provides an opportunity for all artists who are members of the art center to exhibit their work. The show is not juried, but the following awards will be presented: “Sure to Be Famous Award” for an emerging artist, “The X Factor Award” for best of show, “The Wonderful, Wild and Wacky Winner” for originality and the “Just as Good as a Spam Museum Award” for agriculturally-themed art.