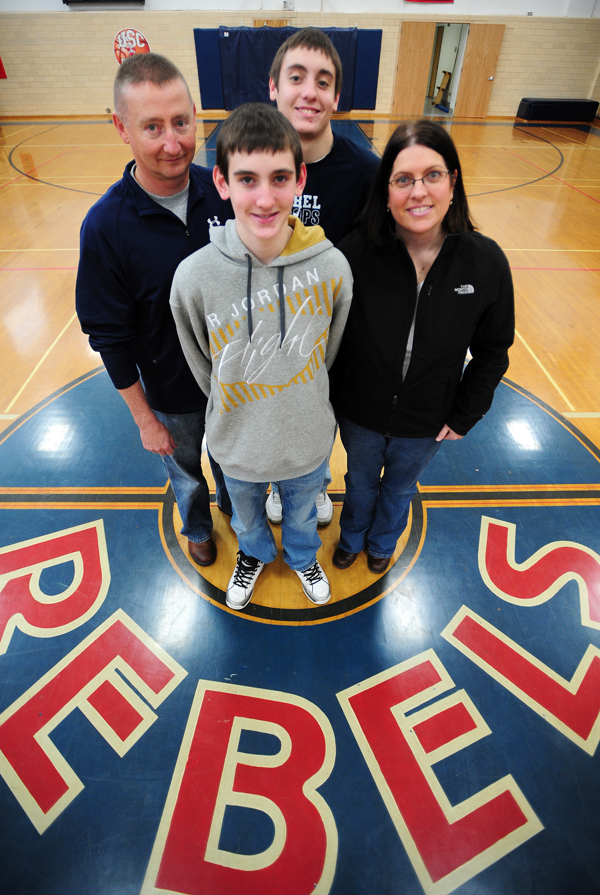 Pierre Stencel, of Maple River, surprised his sons on Jan. 5 after year in Afghanistan during a United South Central basketball game. Pictured is Pierre, left, Cole, back, DeAnn, right and Trevor Stencel.

Dad surprises sons during basketball game after a year in Afghanistan

Escorted by three fire trucks, Pierre Stencel, an E8 master sergeant of the U.S. Army Reserves, arrived at his oldest son Cole’s basketball game in Mapleton on Jan. 5 after a one-year deployment in Afghanistan.

“The fire department wanted to escort him all the way home, but I knew he wanted to get to that game,” Stencel’s wife DeAnn said. “I told them, ‘You can escort him to Mapleton but that’s as far as you’re going to get him.’”

The game against Maple River, Class AA’s No. 3-ranked team, is United South Central’s biggest rival and Stencel, who was an assistant coach for USC before being deployed was determined to be back in time to watch.

So, DeAnn started planning it as a surprise to their children Cole, 17, and Trevor, 14.

She said she wanted to make it a surprise because they thought Stencel would have been home a lot sooner once he had reached the states, but it was taking a while and everyone was getting anxious.

“I hated to even talk about him coming home anymore,” DeAnn said. “I hated to say, ‘This is when he’s coming and then he wouldn’t.’ So I didn’t date it.”

With his original flight time, Stencel would have missed the game and arrived home at 10 p.m. Put on stand-by at the airport, Stencel showed up at 3:10 p.m. as he was instructed and was allowed to board the plane.

“I was pretty lucky,” Stencel said. “I wasn’t certain I would get it because it was already a full flight. Someone was looking out for me.”

Stencel arrived at the basketball game with about five minutes left before halftime. Firefighters and the activities director from Maple River met him at the door. Almost the entire gym was oblivious to what was about to happen. Before he could even enter, Cole spotted Stencel’s camouflage coat through the door.

“I was shooting free throws and I saw him,” Cole said. “It just hit me, he’s home. I couldn’t believe it. It kind of got to me when I got to the sidelines.”

USC coach Rob Stevermer said Cole was a little shook up. He wasn’t sure if he was injured or what but when he started saying “He’s here, he’s here” Stevermer knew exactly what he meant.

“DeAnn sent me a text message when they were at the airport,” said Stevermer who has coached with Stencel since 2002. “I didn’t say anything to the players because I didn’t want them thinking about it in case they didn’t get back in time.”

Maple River had just called a timeout when Stencel entered the gym. Stencel met Cole at halfcourt and the two embraced while Stencel told his son how much he loved and missed him.

Before the game resumed, the public address announcer clued the rest of the gym in on what was happening.

Stencel then received a loud, standing ovation from the stands.

“It was the perfect time for him to arrive,” Stevermer said. “There were a lot of friends and family in the stands.”

Cole said he thought something was going on because he noticed the relatives who normally don’t attend his games sitting in the stands and his mom was late.

“I was kind of thinking, is he coming or not and where’s my mom?” Cole said.

DeAnn, who works in the building the game was held in, had a feeling the boys would become curious when she was late.

“That’s a big game at our house and I wouldn’t have missed it,” DeAnn said.

Seeing his dad for the first time in person since he left, Cole said it actually made him focus on the game more.

Coach Stevermer agreed, “he had an extra bounce in his step.”

“He was gone for a year and I missed him a lot,” Cole said. “It was great to see him come back at that game.”

When play resumed, USC was able to beat the Eagles in a down to the last second ending 47-45.

“It was a fantastic atmosphere,” Stevermer said. “It was a packed house with not a place to sit anywhere. It was so loud we couldn’t hear each other on the bench. I think all the kids were playing off that adrenaline. You can’t ask for much more during a high school basketball game.”