Funeral Services for Helen M. Benson, of Albert Lea, will be held at 10:30 a.m. Friday at St. Theodore Catholic Church, Albert Lea. The Rev. Timothy T. Reker and Deacon Mike Ellis will officiate. Interment will be in Hillcrest Cemetery. Visitation will be from 4 to 7 p.m. Thursday at Bonnerup Funeral Service and one hour before the service at the church. 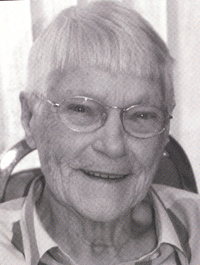 Helen died on Thursday, Jan. 19, 2012, Ellen Kennedy Assisted Living Center in Dyersville, Iowa, where she had been living for the past 18 months, to be closer to her son Tom. She was 93.

She was born on Sept. 26, 1918, in Minneapolis. When Helen was 6 weeks old, she was placed in an orphanage and then at age 6 she was adopted by Ed and Eva (Reeder) Donahue. The family made their home in Albert Lea. She married Ralph P. Benson on Nov. 27, 1937, and to this union three children were born: Robert, Tom and William.

Helen at worked at JC Penney in Albert Lea for more than 30 years before retiring. She was a member of St. Theodore Catholic Church where she had been active in CCW. She had also been a member of the Union Center Auxiliary. She enjoyed crocheting, knitting, playing cards, (especially five hundred), traveling with friends and family, taking care of and feeding the animals and was an advocate for many. Helen had a great love for her family and grandchildren.

She was preceded in death by her parents: Ed and Eva Donahue; her husband, Ralph P. Benson; and her grandson, Christopher Benson.