Memorial services for Marlys Vernon Sorenson, 82, of Clarks Grove, will be held at 2 p.m. Thursday at Community Lutheran Church in Geneva. The Rev. Carrie McElfresh and Rev. Pastor Kent Otterman will officiate. Interment will be at East Freeborn Cemetery with military honors accorded by Freeborn County area veteran’s organizations. Visitation will be from 5 to 8 p.m. Wednesday at Bayview/Freeborn Funeral Home and one hour prior to the service at the church. To sign the guest book, go to www.bayviewfuneral.com. 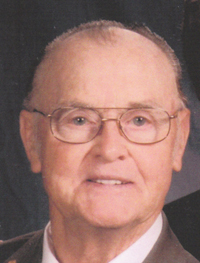 Marlys Vernon Sorenson was born on Jan. 14, 1930, to Albert and Helen (Brynestad) Sorenson in Berlin Township of Steele County. He grew up in Ellendale and attended school in Ellendale. In 1951 Marlys enlisted in the United States Army. On Oct. 25, 1953, Marlys was united in marriage to Theresa Otterson in New Richland. Marlys was a heavy equipment operator prior to working at Bridon Cordage until his retirement. He was member of First Lutheran Church in Ellendale where he was confirmed and then was a member of Community Lutheran Church in Geneva. He was also a member of the American Legion, Eagles, Elks and Moose Clubs, Sons of Norway and the Stateline Polka Club. Marlys enjoyed camping, dancing, gardening, mechanics, reading and woodworking. He liked to go to tractor pulls, and he and Theresa loved to travel many places. Marlys loved spending time with his family especially his grandchildren and great-grandchildren.