Mildred Eleanor Feist Teufert, 97, died Saturday, Jan. 28, 2012, in Hopkins. Funeral services will be held at 11 a.m. Thursday at the United Methodist Church in Alden. Visitation will be from 4 to 7 p.m. Wednesday, at Bruss-Heitner Funeral Home in Wells, and will continue one hour prior to the service at the church on Thursday. The Rev. Cherie Daniel will officiate and burial will take place in Rosehill Cemetery, Wells. Bruss-Heitner Funeral Home in Wells is assisting the family with arrangements. 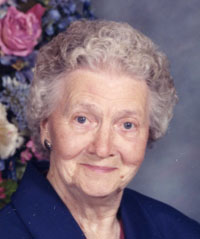 Mildred was born Feb. 22, 1914, in Easton, the second child of seven born to Dorothea Emma Wilhemenia Krumweide and William Sidney Feist. She went to school in Easton and graduated from the eighth grade. At age 17, she started working as a maidservant for three different farm families before marrying LeRoy “Roy” Edward Teufert on Sept. 29, 1937, at age 23. They bought an 80 acre farm three miles northeast of Alden, where they raised three daughters: Anita, Yvonne and Mavis. Besides the farm work, large garden and canning, she occasionally worked at a canning company in Wells. Mildred enjoyed raising ducks and geese and, in her spare time, needlework and crocheting. She also loved music and soap operas on the radio and TV When Mildred “Millie” was 60 years old, in 1974, the farm was sold and she and Roy moved to Alden into a house they built on Powers Ave. She became a member of the Alden Methodist Church and was active in the neighborhood birthday club. Mildred and Roy celebrated their 50th wedding anniversary in 1987. Roy died April 20, 1995. About a year later Mildred started going on very enjoyable bus trips with friends from Alden. After breaking a shoulder blade on a bus trip in 1999, she began spending winters, from Thanksgiving into March, with her three daughters in the Twin Cities area. While at daughter Anita’s in 2010 she fell, crushing a vertebrae in her lower spine. Since then Mildred has been residing at Augustana Chapel View in Hopkins where daughter Mavis became her main caretaker.