Memorial services for Nancy Minks, 72, of Albert Lea, will be held at 10:30 a.m. Monday at Bayview/Freeborn Funeral Chapel. The Rev. Kent Thompson will officiate. Interment will be at Hillcrest Cemetery at a later date. Visitation will be from 3 to 6 p.m. Sunday at Bayview/Freeborn Funeral Home and one hour prior to the service. Online condolences are welcome at www.bayviewfuneral.com. 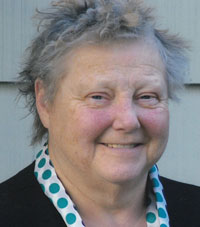 Nancy Mae Minks was born on Sept. 9, 1939, in Edmonton, Alberta, Canada. She was the daughter of Norman and Ruth (Regier) Allen. She grew up and was educated on the west coast, graduating from high school in San Francisco, Calif. On June 13, 1959, Nancy was united in marriage to Eldren Minks in San Francisco. The couple moved to Minnesota shortly after their marriage. Nancy was a member of the Apostolic Faith Church in Minnesota Lake where Eldren was a pastor for over 50 years. She enjoyed her garden as well as arranging flowers and judging floral competitions. She also enjoyed stamping, card making, and loved music, especially attending gospel quartet conventions. She treasured the time she was able to spend at her favorite place, Cannon Beach, Ore.

Beloved by many, survivors include her children: Michael Minks of Austin and Mark Minks of Albert Lea; sister, Geri Del Pozo of San Diego; half sister and half brother: Frances Clark and Cecil Garbe Jr., both of Portland, Ore.; sisters-in-law: Doris (Hod) Bolinger and Helen Minks; cousins: Kathleen Allen of Seattle, Wash., Thomas Allen of Bend, Ore., and Chuck Hadduck of Portland, Ore.; and several nieces and nephews.