No. 7 Bucs hold off Panthers 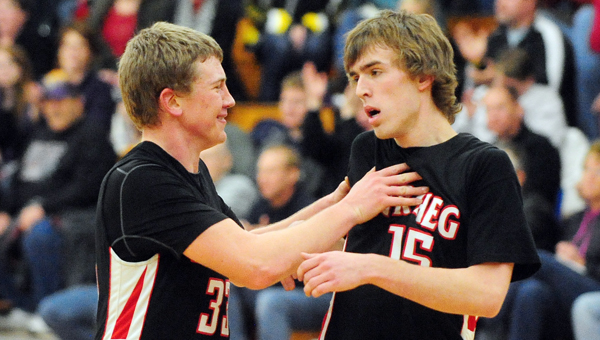 But it came as close as it has since a one-point loss more than two years ago.

The Panthers erased a 17-point second-half deficit, and cut the seventh-ranked Buccaneers’ lead to as few as eight points with 2:45 remaining, in a 68-55 loss in New Richland.

“A packed house saw really good game tonight,” Panthers coach Pat Churchill said. “I think our kids played an outstanding game tonight and can be proud of our effort.”

The Panthers shot 11-for-16 from the free throw line in the second half, and made 10 over the game’s final 10 minutes to keep pace with the hot-shooting Bucs.

Carter Tollefson had 14 points and Sam Lundberg had 10 for the Panthers, who went on a 10-2 into halftime to trail 33-26 at the break.

After trading field goals to start the game, the Bucs seniors Lorenzo Lelli and Tate Harmon made back-to-back 3-pointers to build an 8-2 lead.

Facing what looked like a potential blowout just three minutes into the game, the Panthers (5-10, 3-5 Gopher) responded with a 13-10 run to pull within 18-15 with 11:35 left in the opening half. Five different Panthers scored during the eight-minute stretch, including Lundberg, who hit one of his two first-half 3’s.

Holding onto a three-point lead, the Bucs again looked well on its way to a rout. Harmon made two free throws and Lundberg made one, before Lelli connected on consecutive 3’s within seconds to widen the Bucs’ lead to 26-16 and force the Panthers’ first timeout.

The Bucs (10-1, 6-0) scored four points out of the timeout before the Panthers held it scoreless for the next four minutes, scoring six unanswered and 10 of the final 12.

The Panthers quickly chipped away at its deficit further in the second half, cutting the Bucs’ lead to five off a layup by Lucas Meyer out of the break. That was as close as the Panthers would come, though, as the Bucs’ lead fluctuated between eight and 17 points the rest of the way.

The Bucs had its biggest lead at 54-37 with 9:18 remaining, but the Panthers went on a 15-7 over the next seven minutes run to pull within 61-51. The Panthers were 9-for-12 from the free throw line during that stretch and received 3-pointers from Tyler Sorenson and Tollefson, who Churchill said played his best game of the season.

“He played huge on offense and on the glass, getting eight rebounds,” he said.

The home team wasn’t hot enough to post a bigger threat, through, as it scored once more on another 3 from Tollefson over the final 2:19 and were outscored 7-3 to finish.

“I thought Waterville played their best offense of the night working the clock,” Churchill said. “It was tough for us to turn them over cause they were so disciplined in what they do.”