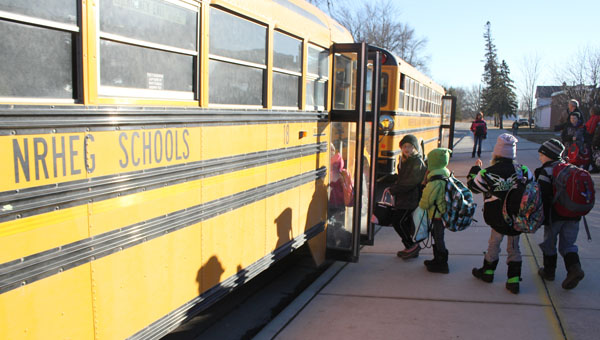 New Richland-Hartland-Ellendale-Geneva Elementary School students board buses after school Monday in Ellendale. Due to overcrowding, sixth-graders may move to the high school facility in New Richland. -- Kelli Lageson/Albert Lea Tribune

ELLENDALE — Enrollment has been steadily growing, and administrators at New Richland-Hartland-Ellendale-Geneva may have to make the tough decision to transfer sixth-graders from the elementary school in Ellendale to the high school building in New Richland.

At a school board meeting on Dec. 19 the board and Wellen discussed some options to deal with the overcrowding. They won’t know whether the next class of kindergartners will need four sections until registration, but if it does the school will be out of space. Wellen said moving sixth-graders to the high school seems to make the most sense, and the board will likely take action at its next meeting on Jan. 17.

“We’re still making sure there isn’t an option we haven’t explored,” Wellen said. “And we’re looking at the mechanics of how this could work.”

“Enrollment has increased, not huge numbers, but increases are increases,” Wellen said. “It’s a great problem to have.”

Right now seventh- and eighth-graders have their own separate wing in the school and only interact with upper classmen when walking to certain electives like music and art classes. Sixth-graders would be able to be housed in that wing, creating a sort of middle school. Students would have a separate lunch time from the upper classmen and be using a different gym.

“It’s our preference to keep sixth grade at the elementary but with space constraints we could make some very good accommodations so they’re still part of a middle school experience,” Wellen said.

One of the factors in the decision will be how difficult it is to move an entire grade of students, because not only the students will move. The move would affect classroom teachers and other staff, special education programming, electives programming like music and art classes and more.

If it’s decided to move the grade students wouldn’t be affected until the next school year starts. Wellen said the move would be permanent and that a “dramatic change” would be needed before sixth-grade would be moved back to the elementary building.